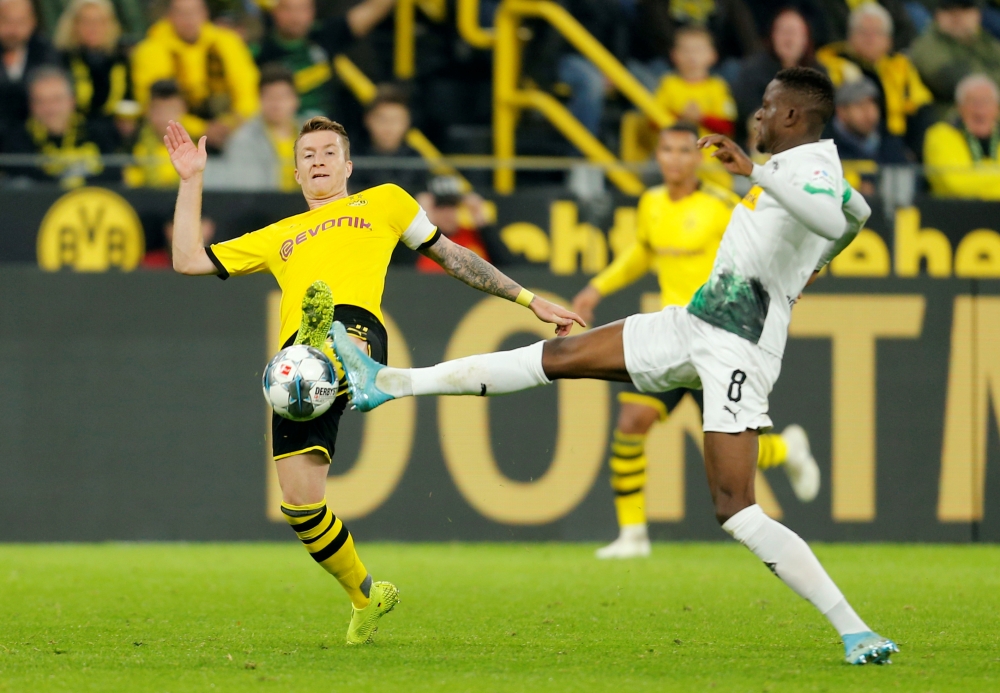 This was supposed to be the season that Dortmund contended for the Bundesliga title.  No team in Europe made the aggressive moves that Dortmund made in bringing in Hazard, Brandt, Schulz and Hummels, to shore up a solid complement of players that finished just 2 points from winning the title last season.

Despite the lavish expense, Favre’s flaws remain exposed, and the team, as it did last Winter and Spring, finds itself reliving the same failings.  Dortmund gets the lead in the second half, Dortmund drops back into the back third, and inevitably Dortmund concedes the equalizer.  For three consecutive league games, Dortmund squandered chances to make a statement and become a legitimate contender by conceding a late goal and having to settle for a draw.  Three failings are obvious: 1) Dortmund is lackadaisical and reacts poorly on corners; 2) Dortmund does not defend well when they drop 8 or 9 players into the back 1/3 and try to hang onto a lead; and 3) Dortmund lacks that killer instinct when they are ahead.  Instead of icing each game with an insurance goal, the attack eases up and the team seems to just patiently wait for the inevitable.

While wasting opportunities to put away Frankfort, Bremen and Freiburg, the players were finally able Saturday to step when needed and see off a game late while holding a single goal lead.  It wasn’t easy, and required as much good fortune as great plays.  Hummels, Burki and Hitz, who subbed in for the injured Burki, all came up with last second saves to hold off what easily could have been yet another draw, as Borussia Moenchengladbach took a respectable 14 shots in this game. Thuram, Herrman and Neuhaus all had point blank opportunities turned back that should have been goals but for last heroics by Dortmund players.

Not only did the players step up at the defensive end, but they kept pressure on BMG’s goal all game.  Dortmund had 16 shot attempts including 7 direct shots on goal, of which Sommer was forced to make 6 saves.  Several of those saves, including saves on shots by Reus, Brandt and Hummels, were excellent saves that easily could have been goals against all but elite goaltenders.  Sommer is as good as any goaltender in the league.

Dortmund also had two goals waived off after VAR review.  The first was an absolute blast by Hazard that deflected into the BMG goal. It was a well set up play with a half dozen passes involving Reus and Brandt, but upon VAR review, Reus was arguably offside on a pass that was three passes prior to the shot. Similarly, Reus was ruled offside on a great goal by Brandt that came late in the game and would have likely iced it with minutes to go, as Reus, while not involved in the play, was ruled to have arguably been in the goaltenders line of sight on the ball just prior to the shot.  In the end, neither controversial VAR ruling mattered as Dortmund grabbed the victory from league leaders BMG to close their gap trailing BMG to just one point.  Wolfsburg is tied with BMG, while Bayern, Leipzig and Dortmund all trail by one point.

While Dortmund is right there, the fact that they lost so many points to Frankfort, Frieburg and Bremen, not to mention the loss to Union Berlin, is disappointing as they could have used a bit of a cushion as they now begin a stretch of playing some serious contenders in must win games.  The Revierderby is this weekend, and Schalke has a chance to leapfrog everyone to ascend to the top of the league on Sunday, as they sit on 14 points and could go to 17 should they beat Hoffenheim in the last match played this weekend.  Schalke, Wolfsburg and Bayern are Dortmund’s next three opponents in the league with every game being incredibly pressure packed with six teams stacked up at the top all within a game of each other.  Not to mention that Dortmund has Inter this week in the Champion’s League, and a German Cup showdown with BMG in the near future.

All is not doom and gloom though.  Sancho will be back, having served a one game suspension for a violation of team rules, Goetze was only out with the flu and should be back, which only leaves Alcacer’s achillies as the only longer term injury to the attack.  The passing, movement and interplay of the attack has been magnificent at times, and they are capable of scoring extraordinary goals.   And Hakimi has been a revelation this season, as he is pushed into more attacking roles and his speed and finish is extraordinary, as he demonstrated in scoring two against Prague in the Champion’s League.   It feels like just a matter of time before the finishing, which is truly outstanding at times but inconsistent, reaches the level where the team starts consistently hitting for 2 or 3 goals against even the best competition.   At that point, perhaps the team won’t feel the ridiculous pressure they put on themselves trying to hang onto a single goal lead for the last ten minutes or more of games.