It often takes me longer to start writing about draws than it does about losses. Sometimes, the losses are just there or there’s simply not much to be said. We fell apart at Watford, it was a disaster of randomness against Atleti, we just got outplayed against City, etc. But the draws… The draws are often aggravating because they’re typically against teams that we should beat and we somehow find a way not to. The eternal caveat remains eternal: This is football, the sport affected more by random chance than almost any other major professional comparable. And, certainly, some days you just don’t have it, especially when playing against a side that is determined to not actually play football, which is so, so often the case against Burnley.

But the thing that really pisses me off about the game today was that it wasn’t typical Burnley shithousery, really. The Clatters, especially after they went down, kinda played a decent game that was interesting to watch (the bar being set very, very low here.) They actually moved against our goal after bringing the ball forward from midfield! Crazy, I know. The real problem today was this

Lead official David Coote pretty much ignored everything on the field, as Robbo was keen to point out in the above exchange and which the boss also referenced to the media after the game. Premier League officiating is reaching the point of farce, which is only that much more obvious when there are no fans in the seats to provide any other kind of distraction or what is the usual foible of most officials: peer pressure (See the book Scorecasting for an interesting analysis of how much officials are affected by screaming crowds.) Witness the PL apologizing for all three incorrect penalty calls and failed VAR follow-ups in a single day this past week. Ordinarily, in a match against Burnley, you could lay this at the feet of the old: “Oh, it’s just a good bunch of English lads against the superstars!” routine that leads to more fouls being called on us than on the “roughhousing” English lads (true to form, fouls were 7-4, LFC) or some fairly egregious play not getting the yellow cards that it should. But now we’re in a situation where an offside-call-that-wasn’t led to a set piece that created the equalizer and where our LB having his legs kicked out from under him in the box- which was flagged by the linesman -isn’t called. That’s a goal allowed and a likely goal not given right there. The usual Burnley stuff was just about the repeated shoving and holding of Alisson in the box on every corner because, you know, that’s just English football, right?

Combine all of that horseshit with some less-than-ideal finishing, Nick Pope being Nick Pope (How is it that Pickford is still the automatic #1 for the national team, to say nothing of Dean Henderson?), and Neco Williams’ rough patches on the right side (there were several moments where our repeated attacks came to nothing when, with Trent Alexander-Arnold, they almost certainly would’ve been something) and you have a recipe for frustration and lost points. Is it a disaster? No. It’s great to be in the position where we’re getting frustrated at not being able to set records or make a mark in history. But without any other trophies coming our way this season, it would kinda be cool to make a couple of those marks and quiet the idiots among the fanbase who are screeching about not signing Timo Werner. First-in-the-division problems, for certain. 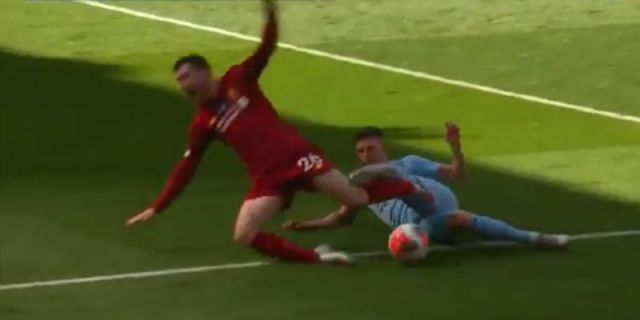 The would-be penalty. Just to reemphasize, since Didi Hamann decided to jump into the Objectivity Pool on Twitter: IT DOESN’T MATTER IF YOU GET THE BALL. It’s still a foul if you follow through and kick the guy’s legs out from under him, which is exactly what happened. Contact was initiated in the box. That’s a penalty. People have been ranting about Man United getting ridiculous calls in the past couple seasons (25 penalties, which is almost twice what the next nearest clubs have) and it’s true that they have gotten some bad ones. But the real complaint isn’t that they’re getting an edge or that there’s a conspiracy to promote United. It’s that so many other obvious calls aren’t being made! With all the time that teams like Liverpool and Man City spend in the opposing box, how is it that United, with their often anemic attack, is the one leading the way on penalty calls? And not only calls that are missed or not made on the field, but with PL officials in the VAR booth also not being pointed out to, say… y’know… maybe use the pitchside monitor to take a look at that again (or the first time)? This is why FIFA announced that they’re going to start setting the rules for VAR implementation, because technology that’s been in use by sports leagues for 40 years is too damn complicated for the hidebound traditionalists who invented the game…

[Deep breaths. Writing these after a draw shouldn’t be a stressful activity.] 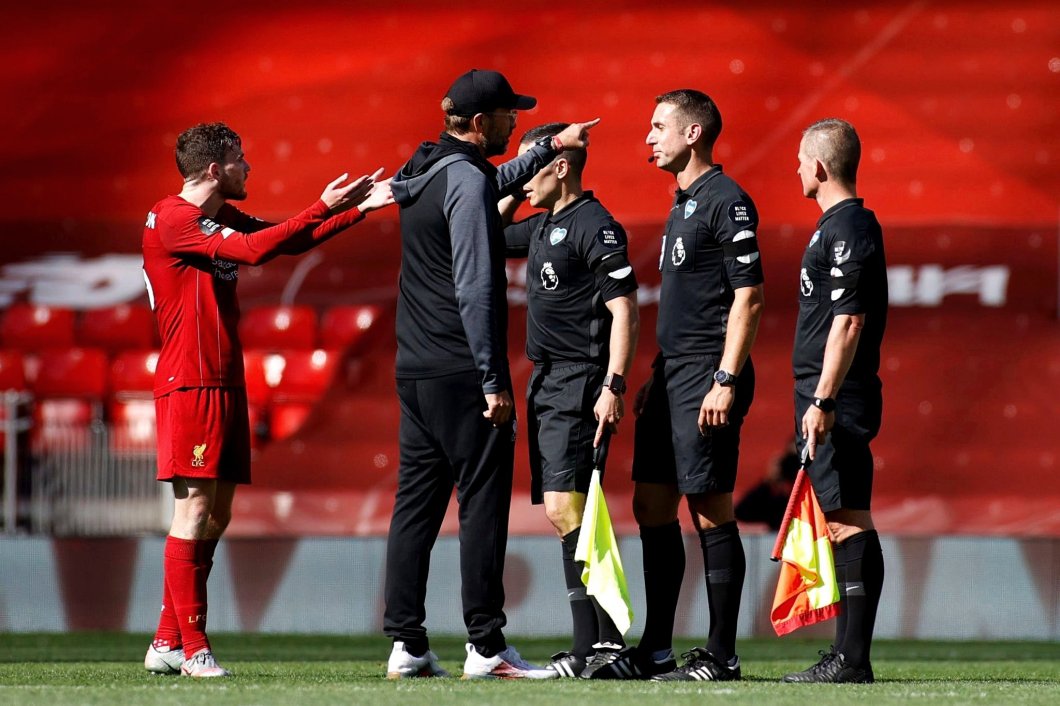 But, OK, otherwise: The game. All of that said, Klopp is right both when he said that “We didn’t win the game because we didn’t score enough, despite our opportunities.” and “I feel like we lost the game. We didn’t.” It is the first time this season we’ve lost points from a winning position (we were 26-0 up to this point.) But, really, there were genuine positives to the game. As noted, Burnley perhaps took some cues from Brighton and played actual football for extended periods (not the first 20 minutes where we had 80% possession…) Also, the first goal was excellent: a curling, perfectly-placed header from the left back coming off the right wing because he’d just kicked a corner, receiving a likewise perfectly-placed pass from the DM. Seems normal.

I thought both Williams and Curtis Jones gave a good account of themselves. There were some rough spots, but nothing disastrous and Williams didn’t get run off the ball like he did against Brighton. Jones, in particular, made some weak passes early on, but then got his feet under him and established a good rhythm with both Williams and Robbo as he swapped back and forth with Gini Wijnaldum. Speaking of which, Gini will probably go largely uncredited (again) for his remarkable ball-retention skills, despite being frequently outnumbered in the middle third and surrounded by Dwight McNeil, Josh Brownhill, and Ashley Westwood. But Robbo was the real star of the show. His performances have been uneven since the break, but he controlled the left side and put constant pressure on the Burnley right throughout the game. Also this:

14 – Andrew Robertson is the 14th Liverpool player to score a league goal at Anfield this season, only in 1992-93 (15, excluding own-goals) have they had more different players score at home in a Premier League campaign. House. pic.twitter.com/W2kwkTPx6W

Then there’s a depth question. First off, DO NOT PANIC. Save me, jeebus. The reactions I see from supposed LFC fans on Twitter might be thisclose to mental illness, if they weren’t so stupid. Yes, we had 23 shots in the game, the most we’ve had in three years without winning (Faithful as always, Opta.) Yes, the front three had 13 of those shots, 6 of them on target, without scoring. Yes, Roberto Firmino hit the post and, yes, Mo Salah missed another sitter. Yes, yes, yes. Those things are all accurate. This is also football (aka “These things happen.”), which is one ameliorating factor. Another is Nick Pope, one of the best keepers in the PL who still had to have the game of his life (8 saves), while playing on a side that’s allowed one (1) goal against an xG of 5.2 since returning from the break. In ice hockey, they’d say he stood on his head.

Howevah, it would be nice to know that there is competent depth for the front line. Origi is not it. Neither is Ox (who turned in a decent run today playing from his usual midfield spot.) Rhian Brewster is still in the wings and scoring at Swansea. Yes, it would’ve been great to pick up Werner, but FSG didn’t feel like we had £53 million to spend and you might want to ask Chelsea how sound they think that decision was today with Rudiger, Christensen, and an out-of-position, 32-year-old Azpilicueta lining up for them next year. There is certainly room to criticize the finishing in recent weeks, especially today. But we’ve scored 76 goals in the league this year, with 43 of them coming from that trio. We’re behind only the machine that is Man City for total output. In short, it’s not a disaster. Plus, the window is going to be open for a long time this year. The boss has already suggested that “things may change later in the window” which is usually code for: “We’re waiting to see how willing the relegated clubs are to make deals.” There was a rumor earlier in the season that LFC were taking a long, hard look at Todd Cantwell from Norwich.

Elsewhere in the league. Speaking of Norwich and relegated clubs, it’s bye, bye, birdie time. The coal mine has spoken and the canaries have set a record for being the club relegated from the PL the most times (5.) This, of course, ignores 100 years of relegations prior and the real trendsetter is Birmingham, who’ve been relegated from the top flight 12 times. Get your shots in now, Villans, because you may be the second of the just-promoted clubs to go right back down. The third, of course, is Sheffield United, who are currently jousting for a European spot and just pasted Chelsea, 3-0. The other downside to the birds getting sent on their way is that the club that put the final knife twist in is West Ham whom, along with Burnley, are one of the clubs I wouldn’t miss at all in the top flight. Go null-and-void yourselves.

Alright, fine. I’m calm. Seriously. I’m just going to try to not think about the next opponent, the Gunners, who have an atrocious defense that we should be able to vivisect and see out the game in a straightforward fashion. Right? Right.