Come out and play 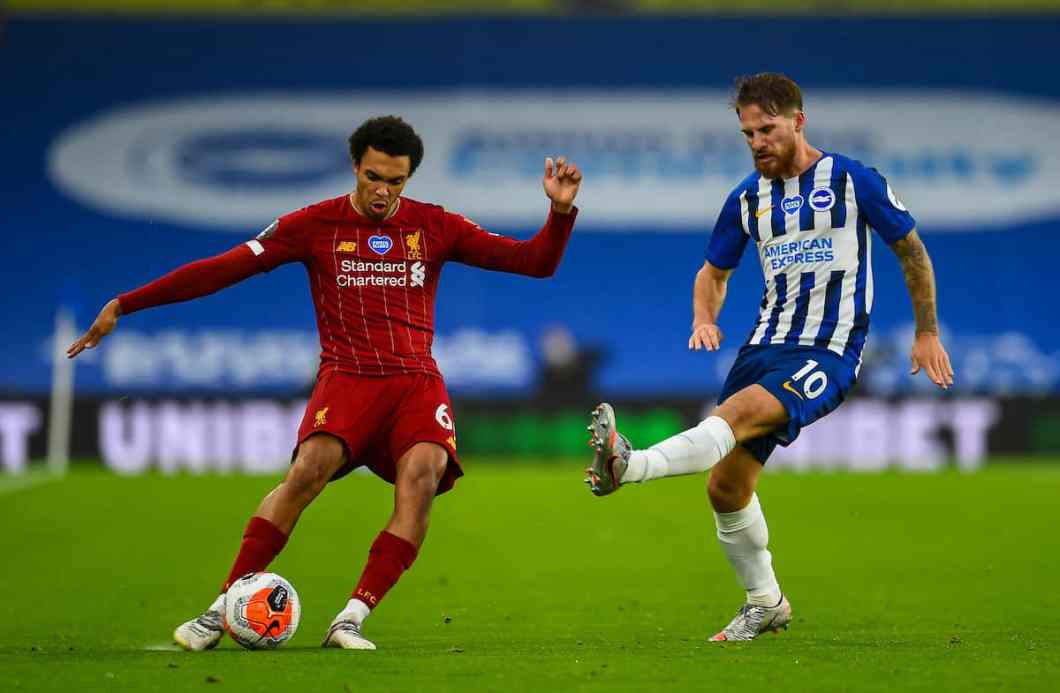 [Yes, these guys inspired the title. I could go on at length about how their first couple albums were worthwhile punk excursions, as opposed to the pop-a-doodle stuff they shifted to later, but that’s not what this blog is ostensibly about.]

I have a great deal of respect for Graham Potter. In addition to keeping Brighton afloat through their third consecutive season in the PL (no small feat for a club that lacks many of the advantages that the top division regulars have), he’s demonstrated multiple times that he’s not going to be cowed or play Burnley-ball against teams with a great deal more talent than he has on hand. His team is set up to attack so that’s how they’re going to play. His latest demonstration of that strategy was Wednesday when he was determined to punch right back at the league champions and run with us up and down the pitch. His side created several chances and put us under some degree of pressure in a game that most thought we would have walked through quite comfortably.

I want football like that. I want both sides to be intent on mixing it up in the middle third and pressing the attack when the opportunity is there. There’s nothing more soul-draining in the game than playing a side that wants to park the bus and and grind out a 0-0 draw. It’s the antithesis of enjoyable sport. Someone who will come out and play with us, even if it means a more likely result of zero points instead of one, at least means they’re more intent on perhaps turning that one point into three, through the wonderful variability of football. They’re playing to win; not just skate by. It’s the Rich Rodriguez philosophy of American football: We’re gonna score a ton and you might, too. Whoever scores last, wins. Granted, Liverpool spent a couple seasons like that and it was aggravating, so there is a certain amount of context applied. If you can afford top defenders, like we can, then there’s no need to play the run-and-shoot exclusively. Wait. Did someone say ‘top defenders’?

That clip is the simplest explanation of why Virgil is the best centerback- the best defender -in the world. That’s a pretty good lead pass for Aaron Connolly and you can see many centerbacks hoping that their keeper is good enough to cut the angle off when Connolly gets past them. You can probably imagine another top defender, our own Joe Gomez, chasing that down and trying to shepherd Connolly away from goal without fouling him. But it’s really hard to think of any other player in the PL casually loping ahead of the attacker, heading the ball to himself, and pushing the ball forward to start another attack (which is what happened after that clips ends.) And, of course, doing it all with that seemingly nonchalant approach that makes it look like he’s taking his kids for a walk in the park. Remember when there were people suggesting that we were playing the higher line this year to take advantage of VAR, as if Klopp would ever do something on so flimsy a basis? Take a look at the above clip and understand why we can (come out and) play our CBs on the midfield line.

The game. Was a pretty solid demonstration of who we are and what we do and a good contrast to the dolor that was much of the Villa game. It’s not often that we get 20 shots against another PL club but, again, that’s partially because Brighton was determined to run with us. There’s no debate that our first two goals came directly from Brighton mistakes, as well, since they also insisted on playing out from the back against a high press. Aside from Virg, one of the highlights of the game was Naby Keita, whose pressure led directly to the first of those mistakes and a nifty assist for Naby to Mo Salah. Keita was also a contributor in gaining possession and delivering the ball forward in the build-up to the second goal. The more time he gets, the more Keita is showing us everything we expected from him since he arrived. Here’s hoping it continues.

It would also be unfair to leave out some mention of Mo. He had a spectacular game last night, disrupting Brighton no matter where he moved on the field, which was everywhere. In the 4 games since the return from the break, Mo has had six goal contributions (3 goals, 3 assists), putting him at 19 (and 9 assists) for the year, three behind fellow Milner assembly line model, Jamie Vardy. He also had three other excellent chances, any of which could easily have been goals on another day. That’s also 100 goal involvements for the Reds in the Premier League era in just 104 appearances. Not bad for a three-year wonder, I guess.

The other notable player in this match was Neco Williams starting at left back for the first time. We’ve collectively been bemoaning the lack of backup for Andy Robertson over the past couple years, with James Milner, Robot Warrior the only sure replacement. Neco is, of course, technically Trent’s backup at RB. But he did a decent job for most of the first half yesterday, including a spectacular goal-saving block on Trossard in the 19th minute, and only giving up a yellow card to Tariq Lamptey’s impressive pace in the last few minutes, for which he was promptly subbed off. Klopp suggested that we failed to protect Neco a few times, which left him exposed to Brighton’s attack. Considering that it was Alex Oxlade-Chamberlain replacing the normally defensively-ferocious Sadio Mané on the left, that’s unfortunately not hard to believe. A few minutes into the game, you could see the adjustment that Klopp made, which was to have Hendo move to the left and swap back-and-forth with Gini at the 6. That gave us the cover that we often needed and still let Naby push the attack. If Neco can pan out to be able to cover both FB slots, that’ll be a huge boon and mean that, once again, we can find replacement players within our own club’s ranks without having to buy them elsewhere. 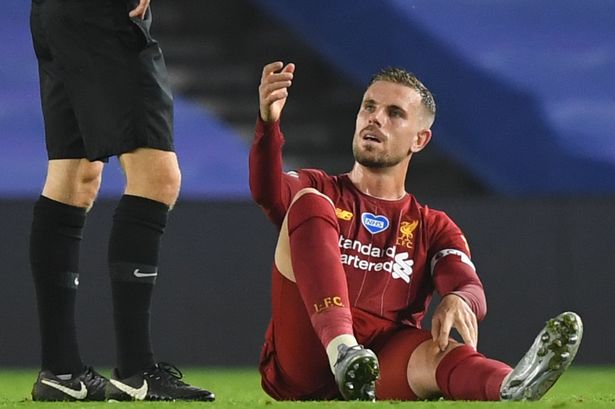 The downside. O Captain, Our Captain went down late in the game after taking a head to the knee. He immediately waved over the medical team and Klopp didn’t look at all pleased in the post-game. The Telegraph was saying something about it being serious enough to keep Henderson out for the rest of this season AND the beginning of next season, which is not good news for anyone but LFC’s opponents (note the above mention of him being the cover guy, while also scoring a goal.) With Keita in stride and Milner having returned and Minamino still extant, we’re not hurting for depth, but Hendo’s presence is important. That said, at least we know his intensity is present with the vice-captains:

The other kinda downside is the continued struggle of Ox. And, really, this goes beyond the COVID break. He’s been present this season and had a couple solid games (the trip to Dean Court being a highlight), but it’s clear that he lacks the explosiveness that he had before the awful knee injury against Roma; a period of time where he was really coming into his own on the team and starting to look like the player that everyone had expected at Arsenal. It can take a long time to recover from injuries as dire as that one (or even less than that), both physically and psychologically, so here’s hoping it’s just been an extended recovery period and not a permanent change to his game.

So, from the almost-but-not-really punk rockers of Brighton to… (sigh) Burnley. On the one hand, The Clatters are in no danger of relegation, so the prospect of having not much to play for might mean they either might try to actually have fun playing football with us or there might be fewer serious injuries. OTOH, this is Burnley and, as we all saw, some elements of their fanbase are as reluctant to change as Sean Dyche (Full credit to Ben Mee for telling said elements to fuck right off.) Fingers crossed for a relatively mundane victory.