Even before he ever set foot in Dortmund, the December signing of Norwegian teen scoring sensation Erling Braut Haaland was inevitably going to be a huge success where he would emerge as one of the best players in Europe.  His statistics at Salzburg were simply off the charts, scoring 28 goals in 24 games, including 8 in the Champions League where he is the top scorer this season. At just 19, Haaland is still young, inexperienced and raw, but without question the talent is there to become one of the greatest scorers on the planet in the not so distant future.   He has the size, he has the power, he is faster than nearly all centerbacks for 10-15 yards, he has a great first touch and the ability to consistently control, hit and angle all of his shots on goal.  Dortmund was without question the perfect match for his skills.  A team with so many attacking weapons and such great speed in Sancho, Hakimi, Hazard, Brandt and Reus, but missing that target man up front. 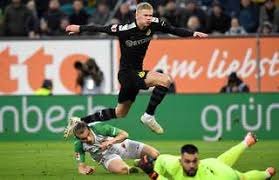 Coming out of the winter break, Dortmund was traveling to Augsburg.  The small Bavarian team had a rough start to the season, but really turned things around in the latter part of the first half of the season.  Augsburg would play Dortmund tough at home, but Dortmund has far superior individual talent and was expected to open the second half of the season with a win.  It certainly didn’t start that way.  Augsburg was pressing high, though not in an overly aggressive manner, and Dortmund was completely out of synch.  Dortmund simply played like a team that was off for the past month.  Dortmund’s tempo in possession was just far too slow, their passing was incredibly sloppy, and the players’ movements never seemed coordinated with their teammates.  Dortmund did create some early chances, but Reus and Sancho couldn’t quite connect on one great opportunity where Sancho’s pass was just a bit too far behind Reus and Reus couldn’t seem to gather it and get a good shot off.  Hazard quickly pounced on an Augsburg defensive mistake, but quickly fired a shot where the goalkeeper was already closing.  And Sancho created a great opportunity but fired it just over the bar.  Dortmund simply looked too slow, too sloppy and too out of form to grab the lead in the first half.

Instead, Augsburg was able to capitalize on Dortmund’s errors and its shambolic defensive organization including its 3 slowest centerbacks in one incredibly ineffective starting lineup.  With Zagadou out, the backline of Hummels, Akjani and Piszczek was just simply a disaster.  Around the 33rd minute, Hazard passed back to where he thought Hakimi was,  but Hakimi was actually more than a few feet further in off the line.  Hakimi wasn’t close enough to to receive the errant ball while Augsburg’s Vargas was, and Vargas was far too fast once he started running with the ball for Hakimi to catch.  Piszczek tried to come over and defend Vargas as he ran down the sideline and turned it in on the Dortmund goal, but he never had the speed to play with a player like Vargas and certainly doesn’t now towards the end of his long career.  And Hummels lacked the speed to stay with Neiderlechner, who was making a run into the box and would be the obvious recipient of a Vargas pass as he neared the box.  Augsburg had capitalized on a Dortmund mistake and exposed the poor organization, poor reactions and complete lack of speed at the back.

Similarly, Augsburg’s first possession of the second half exposed the horrific Dortmund defense once again.  Richter was running with the ball about 20 yards out from goal.  No one from midfield attempted to close him down and none of the centerbacks came forward to meet him.  With nothing but open space around him and Burki too far out of goal anticipating a run into the box, Richter just let it rip.  It was actually a brilliant goal from a player not known for taking shots from distance. At 2-0, Augsburg knew the game was there for their taking.  Dortmund was still bogged down struggling with the high Augsburg press and sloppily turning the ball over.

A moment of Brandt brilliance, though, quieted the crowd for at least a few minutes. Hazard passed the ball Brandt in the box, who takes a step to his right to receive the ball.  He draws two defenders. With several small taps of the ball with his left foot, Brandt spins back around towards the center of the box and inside of the two defenders.  As he completes his spin, he launches a shot with his left foot getting one back with one of his most impressive goals of the season.

Brandt’s moment of brilliance, though, didn’t mask the frail defense, as Augsburg once again pulled Dortmund’s defense apart.  A couple of passes out to leftback Max, who made a run into the box and slid a pass in front of the goal for Neiderlechner to again finish. Both Hummels and Akjani are simply trailing the play unable to even pretend to make a defensive move to stop it. The Augsburg crowd was ecstatic, as they enjoined the beat down the little club was putting on league giants Dortmund.  After only 50 minutes, Augsburg was up 3-1 and looked as if they were far from being done scoring. 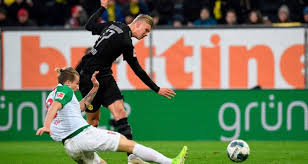 What happened, then, in the 56th minute is one of those legendary moments that Dortmund fans will talk about for generations.  Haaland is substituted into the game for Piszczek. For Dortmund fans there is an immediate electricity in the air, as with 34 minutes left in the game and despite Dortmund’s poor play in the first 56, there is still perhaps a chance of somehow clawing out a draw.  But what Dortmund fans certainly did not expect, even in their wildest dreams, was Haaland somehow igniting a spark where the entire team would raise there game, steal all of the momentum, completely dominate possession and just blow Augsburg’s doors off. But this is exactly what happened.

Only 3 minutes after entering the game, Dortmund works the ball up the left side and find Sancho about 20 yards from goal.  Sancho takes a few steps with the ball, sees Haaland making a run through the middle of the box, and casually slides a perfect through ball  into Haaland’s path in the box and Haaland completes his run through the Augsburg defense and nails at a perfect angle to beat the keeper. At that moment, Dortmund’s players, fans and coaches realized they had the perfect piece for their already potent attack and that they would win this game and seriously challenge for the league title.  Haaland is the real deal and the missing piece that completes the league’s most potent attack.

Just two minutes after Haaland brought the game within 1 goal, Sancho evened it up.  Hummels may struggle on defense at times, but he is still one of the most dangerous players in the game when it comes to starting an attack.  His vision and understanding of the game is so advanced and his passing out of the back so precise that he is another incredible piece in Dortmund’s attack.  It was just moments after Haaland’s first goal for Dortmund that Hummels launched a long ball from the back third.   He saw both Sancho and Haaland lurking near Augsburg’s backline and just launched a long ball in Sancho’s path, knowing he would blow through the Augsberg defense and run onto it.  It was a perfectly executed play and Sancho hit the jets, got the ball, blew past the keeper and ripped a great shot. The game was now even, but it was obvious that Dortmund had only just begun shredding this Augsburg defense.

It was at the 70 minute mark that Witsel gained possession of the ball in Dortmund’s back third.  Like Hummels, he saw Hazard and Haaland already nearing the Augsburg backline, so he ripped a long ball over the Augsburg line knowing that Hazard would run onto to it.  Hazard hit the jets, blew through the Augsburg defense, ran past the keeper taking the ball deep towards goal and then slid a perfect pass back for the trailing Haaland to finish with his second of the day.  Incredible sportsmanship and team play by Hazard in recognizing that Haaland had the easy play.    Dortmund now had the lead, and was still hungry for more goals.

The games final goal came when Reus was running with the ball about 20 yards out and just pushed a pass behind the Augsburg backline for Haaland to run onto.  Haaland then finished his run at goal and nailed it for his debut hat-trick and Dortmund’s 5-3 win.  While some were trying to restrain others from running away with the hyperbole with comparisons to Lewandowski and Ibrahimovich, as Haaland is still young and it was just his first game, the reality is that Haaland is a legit superstar in the making and Dortmund has a scary good attack with Haaland in the lineup (looks like Favre will roll with a 3-4-2-1).  Dortmund may need to work on the defensive lineup and organization with Zagadou hopefully returning and perhaps working Balerdi or another young player in for the disappointing Akjani.  Still, this is going to be fun.  Additionally, Gio Reyna, the 17 year old American made his debut and had at least one interception.  He looked fast and looked as if he will be getting more time with this Dortmund squad.