Coming off the international break, playing last place Paderborn seemed the perfect recipe to rebuilding the confidence of the Dortmund club and starting a nice run to the Winter Break.  An easy win over the last place team that had only scored 11 goals all season, while conceding dozens, might also get the fans off Lucien Favre’s back.

While Dortmund is far from playing up to expectations this season, they are somehow still not out of reach of their goals. Moenchengladbach continues to lead the league, but doesn’t have the roster depth and consistent quality to actually contend for the full season, and routinely lose when facing the better teams in the league.  BMG has beaten  Eintracht, Bayer,  Bremen and Augsburg, but have lost to Dortmund, Leipzig and Wolfsburg. 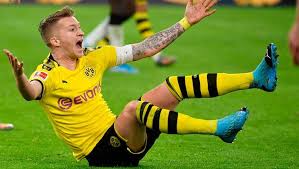 So much for Dortmund’s easy start after the break. The yellow and black got absolutely everything wrong in the first half against Paderborn and were justly jeered off the field at the half by their own fans.  They again struggled against a high press, turning the ball over far too easily, and the defensive line of Piszczek, Weigl, Hummels and Schulz was far too slow to be lined up as high as they were.  Additionally, their passes were absurdly sloppy, the tempo far too slow, and the players far too disinterested to produce any legitimate opportunities.  And the Paderborn first half beatdown of Dortmund at Signal Induna started early.  The slow footed Dortmund backline got caught high in the first five minutes, and the first half route was on.  Paderborn would score 3 first half goals and made it look easy.   After the game, Captain Marco Reus would admit the Dortmund players simply played abysmally poor with no energy.  Piling on to the lifeless performance, Alcacer, having just returned from injury and looking nowhere near fit enough to play, left the first half with yet another injury.

The second half saw the reappearance of the Dortmund team the fans expected to see that day.  Dortmund was far more aggressive, flooded players into the Paderborn box, and almost immediately after the half-time break got back into the game.  Sancho got Dortmund up on the board first.  Dortmund, then, pressed for that second, but it was a long time coming.  Eventually, Witsel headed in number 2, and, then, the pressure was on in injury time for Dortmund to find the equalizer.  Sancho picked out Reus a couple of minutes into extra time and Dortmund salvaged a point. 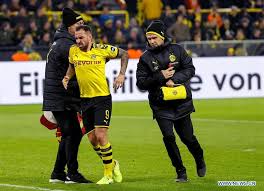 However, the first half performance was abysmally poor, and salvaging a last minute point against lil ole Paderborn was so unacceptable that an emergency meeting was held among the powers at Dortmund for over two hours as to the fate of Lucien Favre.  Though Reus and others admitted that it was the players that were lackadaisical in the first half, a fifth draw in the league, including a loss and a draw to newcomers Union and Paderborn, are far from what the Dortmund brass and fans expected this season.  At the end of the day, all confidence in Favre is lost, but with the club traveling to Barcelona in a just a few days, the timing was completely wrong for pulling the plug on Favre this weekend.   Certainly, there are many in the executive offices in Dortmund upset that the plug wasn’t pulled on Favre’s tenure immediately following the debacle in Munich.

Dortmund fans aren’t fools though.  Complete confidence in Favre is lost and it would  take a miraculous turn of events for him not to be replaced at the end of the season.  However, failure to be within reach of Bayern and/or Leipzig at the Winter Break and to advance out of the group stage in Champion’s League will be seen as a major fail for the first half of the season goals, and the club could look to an interim manager for the second half of the season.   Another Paderborn/Bayern type performance in the first half of another game in the league or Champion’s League, though, could instigate a much more immediate decision before Dortmund even reaches the break.  This weekend’s vote was in no way a vote of confidence in Favre, as much as a decision not to make a rash decision just days before the Barcelona game. 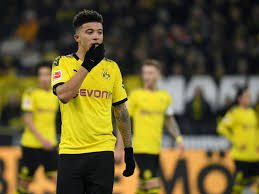 The importance of making it out of the Champion’s League group can’t be emphasized enough.  The club won’t collapse should they slide down to the Europa Cup, but the large payout that  comes from advancing and the ticket sales generated for the next round not to mention the prestige would go a long way towards bringing in another striker.  Dortmund must bring in a legitimate scoring threat and it cannot wait until summer.  Alcacer has just not been healthy and is backed up by nobody.  Goetze is just not cutting it as a false nine. Being able to sell Champion’s League play this winter and having a pile of cash to spend would certainly help. No idea who that might be, but they need help and now.