Proper villains snatch victory out of your hand at the last minute. Proper villains leave you stewing in frustration at what might have been and desperately waiting for the next match to turn things in your favor. Proper villains are the ones who always seem to have the upper hand, even when they don’t, and even when they’re playing some other Villans. Proper villains don’t just “grind out wins.” They start with Al Davis’ (a genuinely proper villain to much of the NFL) approach: “Just win, baby.”  This is why they call it “Kloppage time.” Granted, this is far from the first time this has happened in recent months, as Opta is keen to point out:

35 – Sadio Mane scored the 35th 90th-minute winning goal by Liverpool in the Premier League, 10 more than any other side in the competition's history; five of those have come since the start of last season, more than any other team. Clutch. pic.twitter.com/xQ9C5H6izh

I can’t read the above tweet without giggling. Of course, that giggling is set up by the various cries of dismay/astonishment/bemusement emerging from r/soccer, where it’s largely the ManU fans for the first category, most other English clubs for the second, and everyone else for the third. Man City Redditors, to their credit, largely just shrugged their Internet shoulders and said that they expected this. They know us. We know them. Next Sunday should be a blast (presuming it turns out as something other than another 0-0 draw with a late penalty still in low orbit.)

This was also an ideal “mentality monsters” game because, let’s face it, Villa was the one that came out fighting for the first 20 minutes. Klopp noted afterward that he wasn’t pleased with the body language in the first half and that was the biggest element of his halftime talk. We have to play all of these matches like we’re ready to win them because our opponent surely will be when they’re playing the league leaders. If we try to slide by or take a few minutes off because it’s a long season (which it really will be in the next two months), our opponents (unless they’re ManU) will definitely take advantage. Once they got the lead, Dean Smith’s normally well-organized defense could take over (ably assisted by Martin Atkinson in the booth and some less-than-adequate finishing) and see just how frustrated LFC could become. But the sign of a good team is also the ability to shake off what didn’t work 30 seconds ago and just think about the ball ahead of you. That’s what we have.

I’ll be the first to admit that this has become an annoying trend. That’s four straight league games where we’ve let in a goal to go behind and had to dig our way out of it. Thankfully, we’ve secured 10 points out of those games which is not something that could always be said about Liverpool teams of the past, including the recent past. It also perpetuates the strange consistency of 11 games, 2 clean sheets, and 9 games where we’ve allowed precisely one goal each. We’re now in third place, defensively, in the league (Leicester and Sheffield have allowed 8) which might be a concern if we didn’t already have 31 points out of those 11 games. Seriously, I know the margins will be fine because they were ridiculously fine last year (precisely 11.6mm, IIRC) but worrying about goal difference is a fool’s errand 99% of the time. Just win the ones you’re supposed to win (i.e. all of them) and things will be fine. (Yes. That’s a joke.)

Speaking of fine margins. OK. This is getting ridiculous. That’s the first line drawn via VAR for Bob’s disallowed goal in the first half. Not offside, right? Yay. Goal. But wait-! 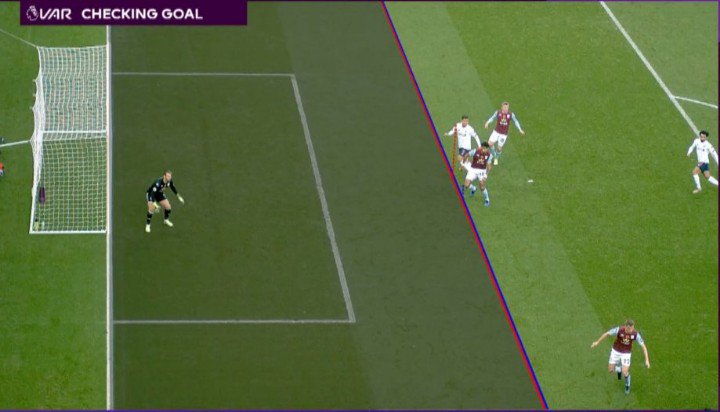 Atkinson decided that Bob’s armpit was somehow offside when he redrew the lines (Why did he do that? Good question.) Somehow, this more distant angle doesn’t include Mings’ knee, either, which you can see in the first pic is past everything of Firmino except his hand, which you can’t score with unless you’re Diego Maradona or Thierry Henry. So, why is a more distant perspective used to override the closer one that shows him to be onside? Because VAR isn’t being used in the EPL to get calls right. It’s mostly being used for officials to stick up for each other. The linesman, despite being trained to NOT raise the flag in close calls, does so and then VAR makes a call just as ridiculous as the one used against Heung-Min Son a couple weeks ago in the Palace game. If it were actually used to make calls that officials miss or correct the ones they do make, it would have been used to call the handball in the box by Targett, which blocked a shot by Ox.

Again, this is going to start sounding like a mantra, but this has to be a tacitly approved plan by the league to get rid of the system at some point in the future. The officials don’t want it because it makes them look “wrong”, so we have to suffer with the idiocies above until everyone just gets frustrated and shrugs when it goes away. Meanwhile, it works fine in every other nation in Europe. 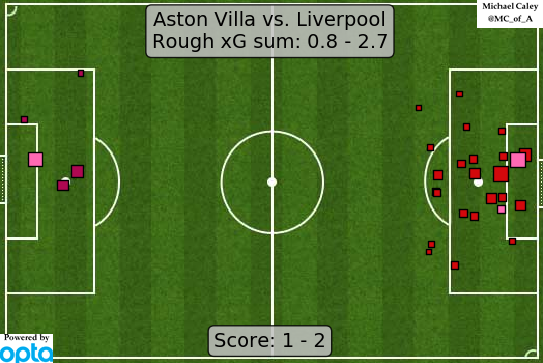 Siege mentality monsters. That’s, uh, mildly insane. I’ll save you the counting: That’s 25 shots to their 5, albeit only 6 on target (to their 2.) That’s on top of 74% possession, overall passing accuracy of 84%, and 10 corners to their 2. If we hadn’t gotten any points out of this game, it would’ve been far more frustrating than almost anything Jon Moss can do. No one exemplifies those stats more than Mané.

He’s almost easily MotM, simply for his relentless energy and his direct contributions to both goals. But then there’s Trent:

100th appearance for the Reds 👌🏻 pic.twitter.com/JmCOZoDSQv

In his 100th appearance by the age of 21, Trent put in his normal game; which is to say, a spectacular performance. This kid is already growing into a legend and one of his brilliant corners (taken kinda quickly) led to the winner today. That set piece approach was something that Klopp said they worked on in training this week.

Now, full picture: Henderson has been having a rough go of it in the last couple games, which just serves to give ammo to the people constantly wailing about Keita and Ox not seeing more game time. But they did get time today and you could say it turned some things around, except that the Villans had already completely bunkered in, so it’s not like there had to be some great expenditure of effort to move the ball up. And there’s no way that Hendo should always be the main target of the blame for a poor performance, either. Lallana was also given his share of stick for, of all things, not being Fabinho. The latter was sitting because he has four yellow cards and one more would have caused him to miss the City match. While Lallana isn’t the top choice to play the six in his stead, if you’re already playing the other two guys who are (Hendo and Gini), it’s understandable. Also, about that whole “poor performance” thing:

Most key passes for #LFC vs Aston Villa. 👀🎯#LFC 🔴 pic.twitter.com/7J1lxwjzO6

Key passes are assessed as those that contribute directly to a scoring chance. If you actually watch the game again, you can see clearly what’s happening in our midfield, including the deadly cross that Hendo put in the box for Mané in the first half. So… yeah. Ox and Naby will get their time, but there’s nothing wrong with the gaffer’s decisions to date.

This week: The genking happens again (hopefully) in three days and then it’s the showdown of the two baddest dudes in town: City comes to Anfield next Sunday. I’m really hoping Fabinho doesn’t pick up another card next week because we could really use him two weeks after when we go visit Zaha Palace but, yeah, whatever. Next week is THE game of the season so far. Just win, baby.