So, you know that thing I was saying on Sunday about no one caring about the League Cup?

Yeah, I still don’t care. This was a raucous, insane game with a lot of bangers, a lot of horrible passing, a lot of “That’s why he’s not ready for prime time…” moments, and a number of hilariously fun ones, too. I’m not sure I can imagine a more interesting game to watch for neutrals and, because no one cares about the League Cup, one almost as exciting to watch for fans of the respective clubs, as well. You can’t argue with the boss, who was laughing at every goal that went in, for them and for us, when he said: “I don’t know when I last had so much fun at a game.” Of course, shortly after that, he was on the EFL’s case for their scheduling, since the quarters are supposed to happen the day before we leave for Qatar for the Club World Cup, which means that we might forfeit the quarterfinal match after having gone through this back-and-forth craziness, plus penalties, to get there. Imagine Arsenal having scored 5 at Anfield, only to lose on penalties and then discover that we have to forfeit the next match, anyway. Sorry ’bout yer luck.

This is why. Aside from all of the spectacular goals and thrilling comebacks, one thing that stuck out to me repeatedly was the performance of the midfield. That group was, by far, the most veteran of the three units out there, with Lallana, Keita, and Ox. It was also the most obvious indication of why Hendo and Gini are the regular starters in that midfield, alongside Fabinho. Yes, Lallana is no Fabinho and, yes, Gomez had a generally poor game and Sepp van den Berg had a first-time starter one. But that doesn’t disguise the fact that Arsenal, rearmed with the still-quite-excellent Mesut Özil, was able to cut through the middle third with ease. Klopp sent them out there to play our usual tactics, which involves a middle block, and they couldn’t do it. That is why the “uncreative” midfield has pole position when it comes to game time; they secure the middle of the field and let everyone else on the field do the things that Klopp wants them to do. Keita and Ox (and Lallana) aren’t there yet and, given Keita’s frustrating injury history in a season-and-a-half, he may never get there, since he hobbled off the field (again.) Fortunately, his replacement, Curtis Jones, did much better, not only staying in the right position, but feeding Origi for his brilliant turn for our fourth goal.

On top of the regular reasons not to care about the League Cup, there’s also the VAR thing. Because English football is so hidebound, they finally had to give in and use VAR for regular league games, but they’ll be damned before they’ll do it for the hoary old League Cup (a trophy with less than half the lifespan of the FA Cup, mind you.) Of course, if they had done the sensible thing and used VAR for all major competitions, they would have noticed that a) Torreira’s opener for Arsenal was from an offside position and b) there was a blatant handball in the box 30 minutes later (which, thankfully, was obviated by the penalty from Özil’s foul on Elliott a couple minutes after.) There’s no point in using technology in one competition and then not using it in another involving the same teams, the same fans, and the same cameras which easily spot all of the errors on the field. The point to it is feeding the obstinacy of the FA. Use your tools.

The young’uns. Back to front, I think Kelleher did OK in goal. You’d have liked him to secure the second one before Bertinelli could pounce on it, but that’s not a huge thing. The rest he really didn’t have much chance at. Plus, he saved a penalty to get the win. Neco Williams had a very up-and-down game, being very uncertain on defense and along the touchline and, of course, lacking the deadly accuracy of Trent’s crosses. But his pace was good and he was doggedly determined to get into every situation he could. His best cross of the evening, of course, was the almost-perfect one for Origi’s acrobatic equalizer. Van den Berg showed a lot of uncertainty on the ball and it was clear that the speed of this level is still a little bit past him. He’s thinking too much, rather than reacting. Brewster was solid. He had a couple moments in the box where you’d expect a bit more, but he seemed to grow into the game as it proceeded, which is a small argument for more game time. But there’s no comparison between him and any of the regular front three, at this point. Elliott had some moments of brilliance, including the feed to Origi right before halftime that the latter should have scored on 99 times out of 100. This, unfortunately, was #100 that went over the bar. (Guess he made up for it later, though.) I’d like to see Elliott show a little more control as he moves on. Jones, as noted, had probably the best showing and in the least amount of time, which speaks highly of him. 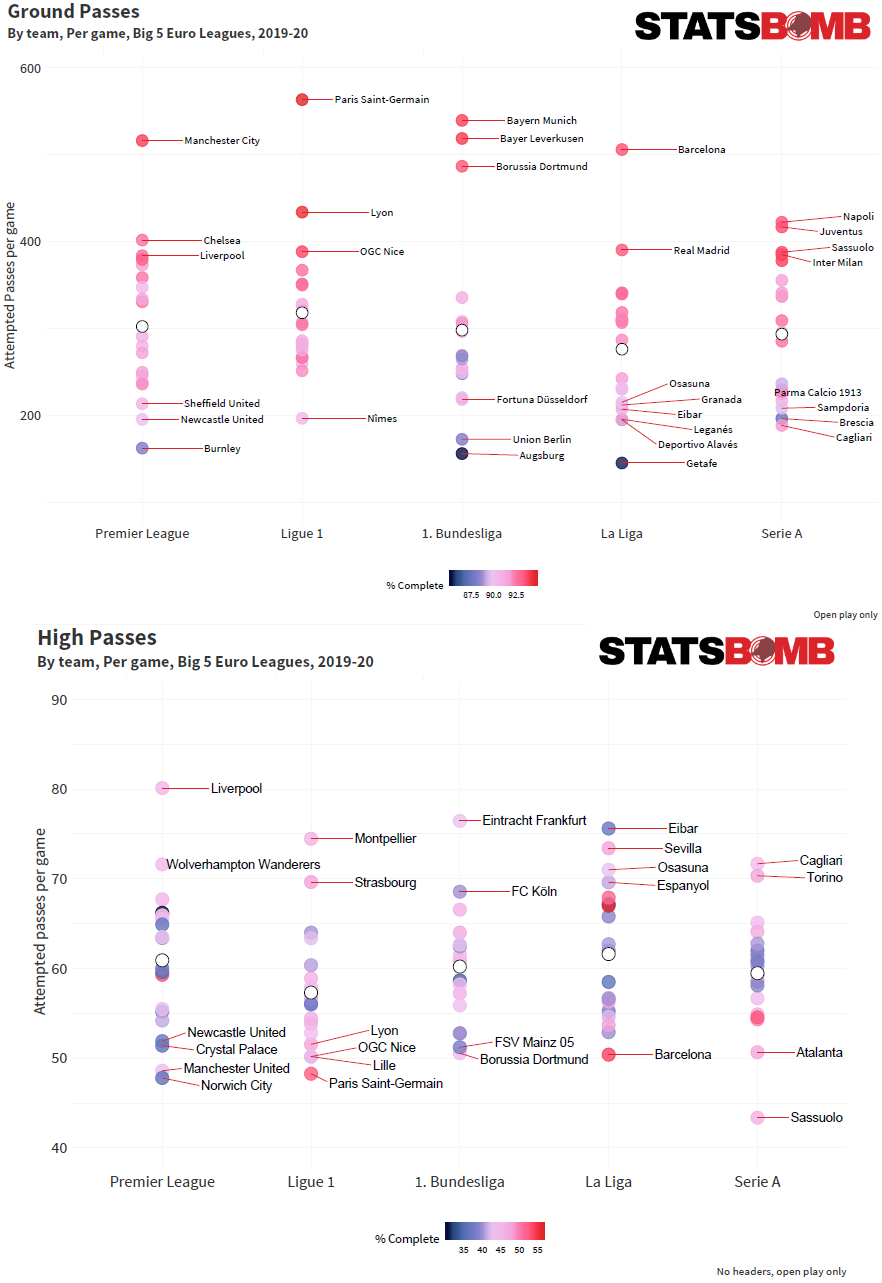 Other things. The above are a couple tables supplied by a Redditor from StatsBomb, charting the type and frequency of passes among the top 5 leagues in Europe. It should come as no surprise that the teams generally regarded as the best of their respective leagues are at or near the top in short passes, since that kind of movement and possession, still influenced by the tiki-taka era, is dominant in the current game. Where Liverpool stands out is the high frequency of long passes, based largely on their tendency to switch play between the fullbacks on a regular basis and even multiple times during the same attack. No other successful team really plays like this except Frankfurt. It was cool to be able to see them play against my ‘other’ team, St. Pauli, in the DFB-Pokal on ESPN3 last night (which is, uh, why I didn’t finish this until now…) and you could see the attempt to duplicate LFC’s approach. Most squads don’t have the personnel that we do in terms of fullbacks and a keeper who is normally really accurate with his long balls AND at least one CB (Virg) who is similar.

The draw. As announced this morning, we get the Villans in the quarterfinal which may or may not take place. This, along with City’s cakewalks, are becoming a thing, lately. Certainly, this late in the competition with it dominated by Premier League clubs, you’re going to run into the usual suspects. But Southampton drew City in the competition four days before playing them again in the league. We drew Villa.. and guess who we’re playing this weekend? It’s not like we could’ve drawn… I don’t know… Colchester or Oxford like the two Manc sides did, right? Once again, this is an opportunity to play the younger/less active guys, but we’re drawn against another side that, y’know, actively wants to win this thing. But, we had that problem against Arsenal and still came out on top, so what do I know?

On to scenic Birmingham…