I hate those games. When I was a Michigan fan, it always seemed that Michigan’s football team would run into an opponent whose starting QB was out and their backup would end up looking like Tom Brady. Similarly, LFC has played enough games against opponents where their top striker is injured and, yet, the 20-year-old backup comes on and turns into Thierry Henry for their one game against us before being relegated to the bench again. This was one of those games. It’s not like Paulo Gazzaniga is an unknown quantity, but he’s a backup keeper and has never been more than that, even for Southampton. (Granted, if he had been more than that, he surely would have been bought by someone else. Probably Liverpool. RIP, Saints.) He has one (1) cap for the Argentines. And, yet, today he played for Tottenham like he was the next Yashin. Given my few observations of Lloris over the past couple years, I’m not quite sure why Gazzaniga hasn’t been given the nod more often, if he plays like this, but Lloris is the team captain (a topic we’ll touch on in this column, if the title didn’t clue you in.)

We had 13 shots on target from open play. 13! Tottenham’s backup keeper stopped 12 of them. We had 70% possession and basically confined Spurs to their own half for the vast majority of the game. Just like against ManU, it was like playing a team from the bottom half of the table (With the way those two are playing, that joke is getting really old, really fast; especially now that ManU have actually climbed to the top half of the table) that basically packs it in and lives on the counter. The difference here is that Spurs’ counter is, uh, really good, as opposed to the usual opportunistic routine that other teams employ.

Klopp said this game “was how football should look.” Eh. Maybe. I think it looks a lot better when both teams are trying to push the offense forward and one of them isn’t just sitting on a 1-0 lead off a rebound into the path of the most overhyped English forward of the modern era. Note to English fans: I’m not saying (Harry!)Kane isn’t a good player. He’s a great player. It’s just eye-rollingly annoying how English commentators turn into 60s-era schoolgirls at a Beatles concert every time he touches the ball. Everyone knew that Spurs were going to sit back and play the counter because that’s what everyone but City does against us these days. It became even more obvious once they had a freak lead to protect. We put their goal under siege (13!) and rarely had to bother to play defense because they weren’t really interested in playing offense. Even when they were, best-player-on-the-pitch Fabinho was present to say: “No. No. We won’t be having any of that.” (That’s an Eddie Murphy reference for the aged among you.) 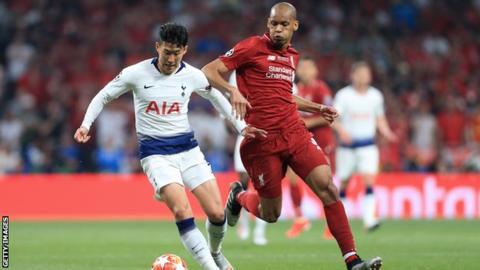 But that brings us around to the question of the midfield. After the genking in Belgium, I’m betting that a lot of people out there were thinking it was going to be the NabyOx show this weekend. Yeah… no. That’s not Klopp anymore. Heavy metal football has become cool jazz football. We’re gonna maintain this saxophone solo until you have no idea what key it started in or even how we’re maintaining that amazing sense of rhythm. And then the music starts. The first questions that occur to me after I see the usual ignorant ranting on Twitter about our lineup are: You know we play a middle block, right? You know that’s what enables us to keep Virg and Companion in a high line, right? You know how you maintain a middle block? With midfielders who can control the space. You know who does that really, really well in our side? Gini and Hendo. Against a team like Spurs, with the rampaging possibilities of Son and (Harry!)Kane, it’s even more important to have proven, controlling quantities in the middle third. That’s Gini, whom Klopp regards as one of the most important players on our squad, and Henderson; our captain, our captain.

Henderson is typically the one who gets the most grief for the lineup. Is he as talented in attack as Ox or Keita? No. He’s probably not even as talented in holding and recycling as Gini is. But Hendo also plays with an enthusiasm that is exceptional, even among Klopp’s Mentality Monsters. He’s the captain of the squad and everyone reaffirms his place on it at every opportunity. Cool Jazz Football is what Klopp wants to play right now and Hendo fits his vision for that. At some point, it’s beyond doubt that the younger guys will fill his spot and he’ll end up like Kompany at City; loudest voice in the locker room and from the bench. But, right now, I’m willing to accept the decisions of the best manager in the world who led us to our 6th European Cup, a club record for points in the league, a club record for consecutive wins, and currently has us six points ahead after 10 games. Klopp has earned his spot and so has the captain. (He also has enough class to admit to Sky what he was thinking right after their goal at 47 seconds: “Uh oh. I’m the one who gave the ball away.”) 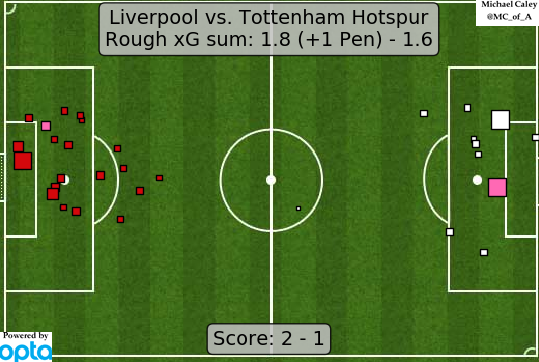 So, that thing about numbers not showing everything. Caley had this game labeled as “a basically even match”, based on the xG rating of both sides. That had to do with the two glorious chances that Spurs had and absolutely nothing to do with the rest of the game. The “contrary” numbers to the xG are our 68% possession, outshooting them 21-11, shots on target 13-4, better pass accuracy, better tackle success, and 8-3 on corners. This also doesn’t mention that Trent had 7 key passes in this game, which is just one fewer than the entire Tottenham side. We controlled the game and Klopp noticed. He mentioned that when we went 1-0 down in the first minute, nothing changed. We didn’t chase the game. We just played it. That’s the mark of a winner.

Perfect midfield performance from the best DM in the world right now. pic.twitter.com/YxLKWwmsVy

Crushing. It. Fabinho continues to own the world from the #6 spot. Of all the purchases we made in the summer of 2018, he was not the one I expected to set the world on fire. There’s no arguing that Alisson has been even more than we all expected, but Fabinho has been amazing and has just been getting better with each game. He had a couple key passes, the most passes in the opposition half, and 11 recoveries to go with the stats above, as well. Pep Lijnders called him “a lighthouse.” I’m more inclined to use the phrase “lights out”, but maybe lighthouses have more relevance to Dutch people? (If he was Danish, that metaphor would totally work.) There was a writer in The Athletic last week who quoted a Proper Football Man talking about Man United, suggesting that the old aphorism among PFMs was that if you had one Brazilian, you had one Brazilian; two Brazilians, you had two Brazilians; three Brazilians, you had a samba party. Now, putting aside the obvious racist and xenophobic idiocies of that statement, I think the implication is that if you have more Brazilians, the team becomes complacent or something stupid like that. Even if you accepted that kind of football saying at face value (Don’t ever, ever do this.), you’d only have to look at Liverpool to put the lie to it, since all three of our players who happen to come from Brazil are among the hardest workers on the team. Yes, even the guy who often doesn’t get any action because Virg and Fabinho are keeping things so locked in the opposition’s end. (Thankfully, more than one commenter who weren’t even LFC fans quickly called out the stupid.)

On the Spurs side. Welllll… I dunno, man. I’m still surprised that Harry (not Kane!) Winks plays for an EPL side, much less a supposedly top 6 one. He was completely in over his head in the middle third. Similarly, Spurs got jack-all from Eriksen; until recently one of their best players. I’m looking at a Tottenham blog that’s citing him with 36 touches for the game and a 61% passing accuracy (plus losing possession 15(!) times; that’s what controlling the midfield means, kids!) That’s poor enough to be benched a lot sooner than he was. If they weren’t still in the running for their CL group, I’d be on the side of the people thinking they might as well cut bait on Poch and look for someone else to finish the year in the hopes of a top 4 spot. But even dumping him doesn’t mean that a half-dozen players won’t still be imagining anything but being somewhere else, unless he’s THAT much of a problem on the training ground.

And I just have to drop this in here because:

Next up is a League Cup date with the Gooners; thankfully, at Anfield, although that didn’t help last time we got bounced. On the one hand, no one cares about the League Cup. OTOH, no one cares about the League Cup and it’d be nice to have some more free time before December becomes a Charlton Heston-like madhouse. But it is a good opportunity for the squad players… Of course, given that Emery is on wobbly ground at the Emirates and the League Cup might be their only chance for an actual trophy, he’ll probably go all-in on this game and our backups might just get bounced, anyway. Blessing in disguise? I dunno. Next weekend is the Villans, so there might be an opportunity for some squad rotation while English broadcasters get to squeal about Jack Grealish…