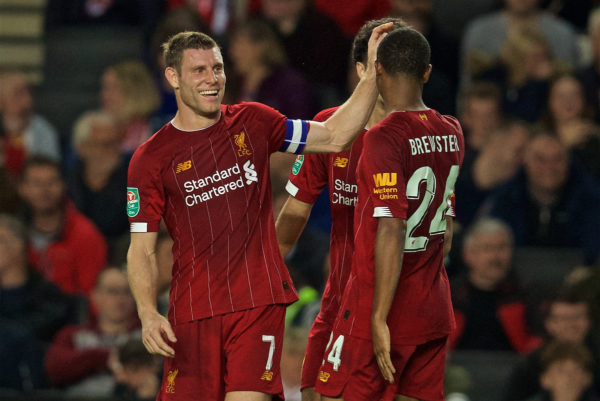 League Cup games are games for the kids, especially when you’re in a position like LFC, where you have a bunch of up-and-comers from the academy, especially guys like Rhian Brewster whom Klopp specifically cited last summer as being the reason for letting Sturridge go. Those guys need game time and so do a bunch of other regular squad players and the domestic trophy games which no one cares about until the semifinals are ideal places for it to happen. Which is, of course, why the best player on the pitch yesterday was regular rotation guy, Jamez Milner. I got in the habit of referring to him as “James Milner, robot warrior” after he’d won the lactate test competition in pre-season for the third year running. That was last year. He’s since added a fourth mark to his streak and the 33-year-old shows no signs of slowing down. Anyone watching yesterday could easily tell who contributed the most, with a goal and an assist on the offensive end and a steady presence all up and down the left touchline on the defensive end, including a dive into the box to save a potential goal by MK Dons in the 78th minute. Yes, still sprinting around the field and keeping the clean sheet in minute 78.

That’s why it was weird to see James Pearce’s write-up in The Athletic cite Curtis Jones “deservedly” taking home the man-of-the-match award. No slight to Jones, who played well, but if we’re assigning the label based on age, Jones was only in the running among Harvey Elliott, Caomin Kelleher, and Ki-Jana Hoever. Pick out whatever highlights you’d like among those four (and, no, not just Elliott’s beautiful touch around the box (he has to track back, too) or because he’s 16), they still don’t measure up to Milner’s presence in and impact on the game. But, then, if we are assigning by age, it should probably go to Elliott.

What was mildly disappointing was watching how much the front three of younguns (Jones, Brewster, Elliott) outstripped the middle three of veterans (Keita, Lallana, Ox.) Ox played the best of the three, pushing forward hard, hitting the post, and creating a couple other decent chances from his #8 spot and it’s clear that Lallana is still developing into the mindset of being a DM. It’s also clear that Keita is still not quite up to form, which is starting to develop into a real concern here. Klopp has mentioned that it has taken time for Keita to settle into a new home, a new language, and a new league. That’s fine. Everyone goes through that. Fabinho had the same problem… but it only took Fabinho about four months to really settle in. He developed into one of our best players at the end of last season and throughout the beginning of this one. Keita has shown no such progress, at least in part because of repeated injuries, but possibly also because he’s kind of learning a new role. His obvious talent at Leipzig was utilized more in the middle, as kind of a regista role (see: Andrea Pirlo for a really good example or Jorginho at Napoli for a more modern one.) We don’t often use that role here, as nothing is going to displace Fabinho from the middle and he’s often a solid enough distributor there, anyway, while Firmino often takes care of moving the attack through the middle. So, Keita is having to find a way to fit his talents into a role on the left side, which gives him a different view of the field than what he was accustomed to exploiting in Germany.

It doesn’t seem like that great a leap, but sometimes it can be. The key thing will just be getting him enough game time so that he can be a regular part of the rotation. Klopp refers to him as “the complete midfielder.” I’m not sure if that’s Klopp just keeping Keita’s confidence high or if he genuinely believes that, because the only word that comes to mind about Keita’s time with Liverpool is “incomplete”, especially on the pitch. 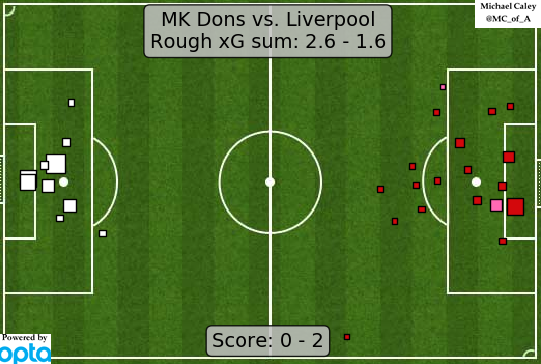 As for the game itself… yeah. Whatevs. I agree with @Caley_graphics’ general assessment which was: “wait… what…” because the image above makes it look like it was an actual game… because it did have moments of being an actual game. I think the Dons played well when they had the ball, which was about once every 10 minutes. It’s also why I said I was disappointed in the midfield because the Dons weren’t playing Route 1 football. They were following a plan of exploiting the spaces behind our fullbacks just like Chelsea did a few days ago and they had precious little interference in that effort in those odd moments when a pass didn’t go awry, which happens a lot at the League One level. Thankfully, the robot warrior and strong play from Kelleher preserved our second clean sheet of the season. 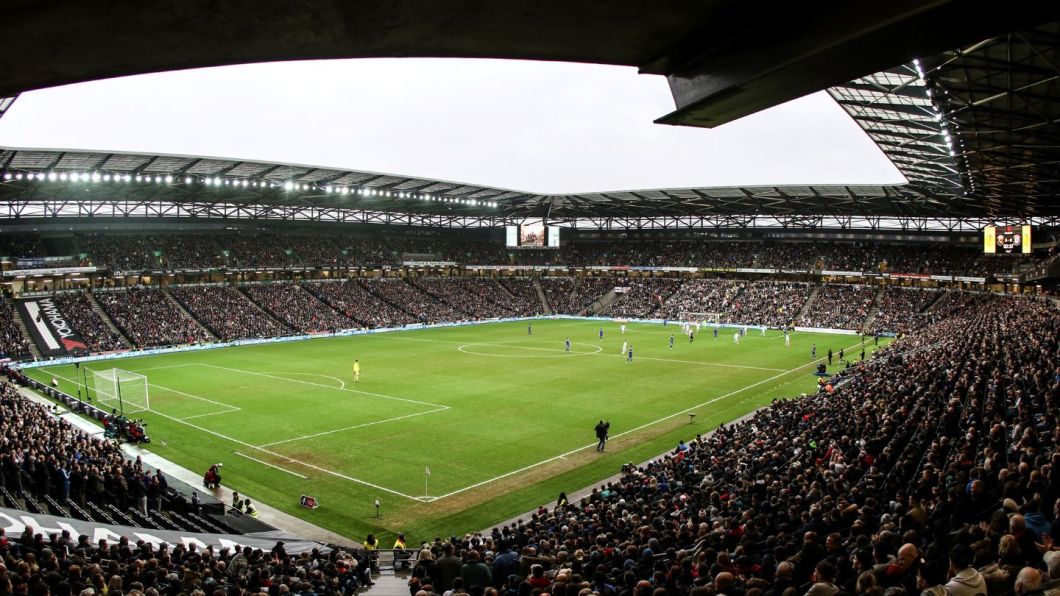 Facilities. It was amusing to hear Klopp give a wry comment about the stadium, remarking about how nice it was and how he wished other London teams had dressing rooms that nice. (Straighten up, Chelsea! It’s not like you’re owned by an oil billionaire or something.) You could tell that from watching, too. That’s a very professional-looking place for a third division team. The only thing that even compares at that level is the Stadium of Light which, y’know, Sunderland.

Draw. After two straight years of getting Premier League opponents in our first round (Chelsea last year, Leicester the year before) and, uh, getting bounced by them, we finally move on to… yet another EPL side, getting Arsenal at home in about a month. Remember that point where I said it’s cool to be able to play the young guys? Yeah. I mean, if Emery plays his young guys, then we can play ours. But considering the pressure he’s under at the moment, he’ll probably still be trying to get as much out of the first half of the season as he can. The complication for us is that it’s also two days after Tottenham comes calling for an EPL game (and three before we have to go see the Villans.) Maybe we just revert to not giving a damn about the League Cup? That’s what I’d do. 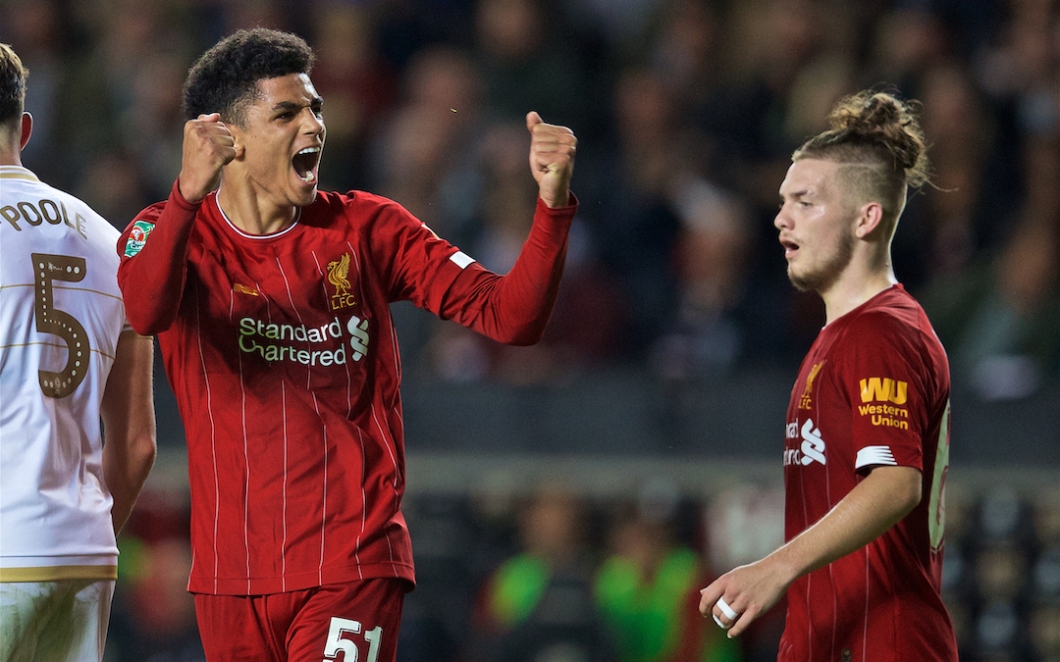 Minor notes about a minor cup. There comes a point where it’s too weird/pathetic to laugh. Spurs are at that point. That said, I can’t wait to hear what Max Rushden says on the Guardian Football Weekly about the absolute pummeling that his team, Oxford United, issued to the Hammers. Noted American, Christian Pulisic, has had reviews of his performance in Chelsea’s rout of Grimsby Town ranging from “decent” to “subpar” and doesn’t seem any closer to being a regular. I thought they overpaid for him, but assumed that if they were paying that much, he’d be seeing regular action. I guess it’s hard to break in when all the other 20-year-olds Chelsea have been forced to use are every bit as good, if not better.

OK. On to Sheffield United and their fantabulous formations. Hat tip to them for this chuckle: