The last two league games for Dortmund have highlighted the best of Dortmund and the worst of Dortmund, providing an accurate depiction of the team’s strengths and weaknesses.  The Leverkusen game was Dortmund at its best.  A massive and raucous home crowd providing the energy, and an attacking Leverkusen team just asking to be dissected by Dortmund’s blistering speed and spectacular link play.

The first goal provided the perfect highlight of what works for Dortmund.  The home crowd provides the energy, Hakimi, playing right back, pressures the ball and earns a steal.  One of the fastest players on the team, he quickly converts the turnover into an attack, blazing towards the box and 25 yards out from  goal he drives a perfect pass into the box for Alcacer, who has pushed behind the line, sets up, and buries Hakimi’s brilliant pass into goal. The play happens so quickly and Hakimi is so precise that Leverkusen is simply stunned. 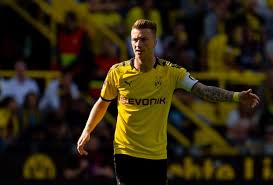 Reus would follow Hakimi’s fantastic play with two goals of his own, and the youngster Jacob Bruun Larsen would get his first of the season to pile on at the end.  Despite dominating possession and creating more shots, Leverkusen was unable to prevent Dortmund from running away with this game, where they tried to play Dortmund in an open game and Dortmund’s energy, speed and precise passing was simply overwhelming.  Hakimi opened the scoring, Sancho provided two assists, Reus scored two goals, andeven the teen sub joined in the rout. 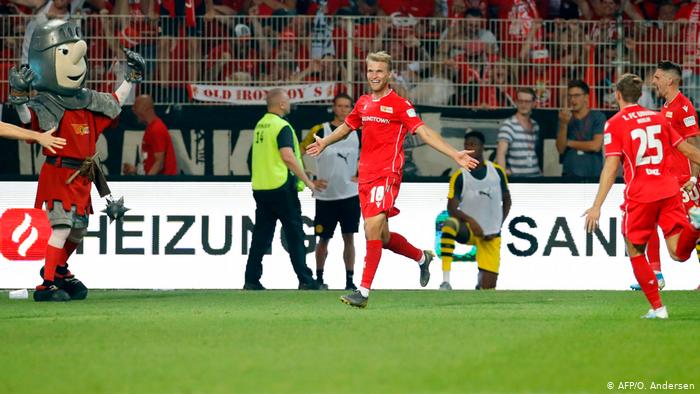 Conversely, Dortmund’s weaknesses were exposed at Union Berlin.  Playing in just its first Bundesliga season ever in the top league, and playing its first home game in the Bundesliga ever, the Union crowd was certainly fired up to see an upset of Dortmund.  And that they did see.

With two tightly packed lines of 4 at the back, and sometimes dropping a fifth into the very backline, Union successfully took away space for Dortmund to attack.  Dortmund had some success with Hummels firing long diagonal passes early in the game.  One chance was created with a long diagonal from the left side, up to Brandt on the right, who ran towards goal from the right side and found Alcacer.  But the combination of slightly off target shooting and great plays by the Union goalkeeper, Gikiewicz, was able to keep Dortmund’s goal scoring in check most of the day.  Despite 75% possession and well over 400 more completed passes, Dortmund simply failed to create enough good chances or finish the few chances they did create to score more than one. With the crowd against, and trailing through much of the game, the frustration seemed to get the best of Dortmund on this day.   Additionally, the tactic used against Dortmund for much of the past few years of teams playing more than excessively physical against the much faster Dortmund squad was highlighted by the collision that nearly knocked Delaney unconscious. Berlin was simply going to beat (slam , hold, grab, step on, shove) Dortmund into submission and it worked. The lighter, much faster Dortmund players can be slowed with violent tactics, and Union perfected the strategy.

At the other end, Dortmund’s Achilles heel for the past two seasons has been defending set plays.  Their vulnerability on set plays is simply laughable at this point, as it has plagued the team for the past two seasons.  Of course Berlin’s first goal came off a set piece.  A quick play-in that saw the Dortmund players far too content at being stationary, while Bülter made a run about 3/4 deep in the box, across the box, received the pass, and continued his run until he found a perfect open lane for a shot on goal.  Three different Dortmund players had the opportunity to close on Bülter, but all 3 were far too slow in reacting and the shot was far too easy.

Behind, on the road, and being beat into submission, Dortmund seemed to capitulate far too easily in the second half. The score got away from them as the Dortmund players seemed to accept defeat all too easily on this day. At the end of the day, one had to wonder if this Dortmund team has the confidence on the road, when things are going against them, to battle all the way to the title.  The Yellow and Blacks did bounce back, so hopefully Berlin will just remain on outlier and not a sign of road struggles to come.

Fortunately, while Dortmund was taking out Leverkusen, Munich found itself extremely unlucky to have come out of Leipzig with a draw.  With their win over Leverkusen, Dortmund is back in first, and, hopefully, is ready to fight Munich for the title.  Leipzig was simply outclassed by Munich, and the final score did not reflect the fact that Munich created the better chances and controlled play for nearly the entire game.  The first half of the season seems destined to peak at the first Dortmund v. Munich showdown, which is quickly approaching.  First, Dortmund starts Champion’s League play hosting Barcelona.  Who knows how that plays out, but, hopefully, Dortmund can pull off at least a draw, as they are likely battling Inter to advance out of the group along with Barcelona and need every point they can get.