Killin’ it. Just bask in the brilliance of his game against Newcastle. He comes on and almost immediately feeds Mané for his second goal (along with a small assist from Dubravka in perhaps the latter’s only mistake of the day) and with this torrent of defending, facilitating, and enabling:

Roberto Firmino the complete player…one of the most intelligent players in the world 👏 pic.twitter.com/fhWETs17D6 #LIVNEW

changes the game completely. He then commits this filthy crime to set up Salah for our third goal:

This has to be illegal… Bobby Firmino what an assist!!!!!🤯🤯🤯🤯 pic.twitter.com/HCqjfpTEqb

Yeah, man. This is a guy doing street ball tricks against other pros and making it look very, very easy. That’s when you know that you have one of the best teams in the world; when even the audacious trickery leads to goals.

The upside? We have one of the most talented and exciting strikers in Europe who does everything but score goals… but also does that, too! The downside? There’s basically no way to replace what he does when he’s not on the pitch. Now, that’s a problem that most teams in the Premier League would be thrilled to have and I know that most Liverpool fans are, likewise, thrilled to have it. When Bob is playing, the team feels unstoppable. But he can’t play all 60+ games for us, especially considering the work he has to put in fulfilling that false 9 role. The gaffer put him on the bench today, probably hoping he wouldn’t see any action, because he’d come back from a fairly tiring trip to play friendlies for Brazil and Klopp would very much like to have him start in the San Paolo on Tuesday. Considering that said game is likely going to be the most difficult of the group stage, getting a win there would take a great deal of the pressure off later encounters with Genk and Salzburg. Granted, playing either of those sides shouldn’t involve a lot of pressure, but it also means that we could really rest the front line and play as many backups as possible (like, say, Shaqiri…) without being overly concerned about needing Bob to ensure a win. One way or another, the team is going to have to learn to function at a high level without him. Given the slate of games coming in November and December, there should be ample opportunity for Cube, Origi, and Brewster to show that they can fill Bob’s shoes for a short time, even if it’s only in the League Cup or against one of the other bottom-dwellers of the EPL (and even if they can’t fill those shoes firmly enough to do that slick off-foot feed right at the top of the box.) 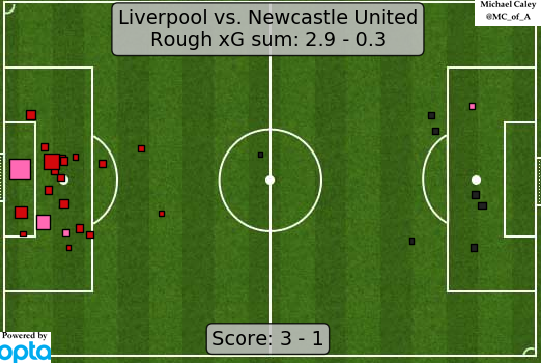 As for the game itself… chalk it up as a pretty routine win. Newcastle got a decent counter in the 7th minute and Willems turned in a rather brilliant strike. For anyone bemoaning Alisson’s absence or the loss of another clean sheet, rest assured that Alisson probably wasn’t stopping that one, either. It was just a great shot. It happens. Despite dominating the game, it was still tied up before Bob arrived. At the half, Steve Bruce decided that ceding 81% possession to us (I’m not kidding) was probably not the way to win the game, so he switched from his cuddly safe 5-4-1 to a 4-3-3 and actually came out guns blazing for a couple minutes before we shut that down and the front line started terrorizing their third again (and we still ended up with 76% possession. In an EPL game.)

But notable names other than Firmino were largely in the midfield: Gini had 96% passing, completing 75/78 (44/44 in the first half) won both his tackles, 2/3 aerial duels, had an interception, and took two shots; one of which was almost a wonder goal off a feed from Robertson. Fabinho had 93% passing for the game, 10 recoveries, and 2 interceptions. Ox also created several danger moments for United’s defense with his speed and quick passing. For all those bemoaning the lack of a “creative” midfield, I think our midfield trio, regardless of makeup, is doing exactly what Klopp wants them to do: controlling the game.

Oh, but on that front three again:

Dream start to the season for the best trio in world football.

But on this other thing that’s not so good. You would be forgiven these days for thinking that there’s a conspiracy within the Premier League to execute the VAR system in so incompetent a fashion that it will eventually get voted out of the league. Because

there is no league in any nation at any level of football in which that is not a penalty. You can’t say the ref didn’t see it, because in the course of Matip being put in a headlock and pulled down, the ball hit his head, as he was still struggling to complete the play. But because EPL refs have reached a new level of officiating incompetence, it wasn’t called on the ground. Consequently, despite VAR being present to correct clear and obvious errors (and you can’t tell me that commentators in the US, England, France, and Italy could all be simultaneously and coincidentally wrong when all of them looked at that and said some version of “That’s an obvious penalty!”). no one called down to suggest that Andre Marriner take another look at the play. And this is a recurring problem this season. You now have fans yelling about how “VAR is shit!” and the more reasonable among us reminding them that it works perfectly well in every other nation of Europe and during international competitions (I feel a rant about US healthcare coming on.) There’s nothing wrong with the technology but, like most things, it’s only as good as the people using it. In true Brexit fashion, the EPL has basically decided to “get VAR wrong”, for lack of a better phrase. Hooray for the Philistines.

Oops. Don’t know about you, but that feels like a 5 point lead in September.

That’s GOAT to you.

In two days, we travel to sunny Italy for the opening of the Champions League. Yes, it’s a 3 PM game on a work day. Make it to Magee’s, anyway, you slackers.