Sean Dyche is a troll. Let’s just get that established right away. He sits under Bridge 442 and tries to bite anyone that tries to cross over into his zone. He’s set up his side to basically follow that perspective, too, since it plays to the crowd of trolls that show up at Turf Moor for every home game; otherwise known as “Burnley fans.” This is the crowd that, instead of singing their own songs to drown out the traveling Liverpool fans’ rendition of “You’ll Never Walk Alone”, decided to try to drown it out with booing. This is the crowd that was booing every touch of the ball by Mohammed Salah, not because he used to play for them like Soton does to Virgil, but… because he’s Mo…? Maybe it’s easy to boo the guy who doesn’t “look English” like all the Proper Football Men who play for Burnley? Of course, for all their and Dyche’s apparent appreciation for old school English football (complete with the almost exclusive Route 1 approach; more long passes than any club in the EPL), this is also the crowd that was booing the linesman for a couple minutes because they thought Mané was offside when receiving a pass from Firmino… in their own half. Just because your team doesn’t know how to play football doesn’t mean that you have to be oblivious to the rules.

What compounds this is the way these games are often officiated, which just screams “I’m going light because this is a small town team of mostly English guys who play football the ‘right way’.”; that “right way” meaning with often ridiculous tackles and enough uncalled contact to produce injuries. This is why I detest this match every year. I don’t normally take an opinion on the status of other teams in the table. If clubs get relegated, it’s because they couldn’t compete (Cardiff) or they screwed up (Leeds.) I take no particular joy in either, mostly because I don’t care. I would gladly watch Burnley take the long walk down to the Championship again, however.

But there’s another kind of troll out there. Out here in the sports Interwebz, we refer to them as “concern trolls”, because they’ll claim to be fans of a team, only to constantly fret about things that said team/coach/player is doing wrong and how said team/coach/player is going to ruin the glory that they would otherwise be basking in. Most of those voices rose up against Mo Salah yesterday because of this:

What followed was a host of Twitdiots somewhere between clucking and outraged that Salah was so “selfish” and that this “rift in the team” meant bad things for the campaign and yadda, yadda, yadda. First off, yes, Salah fucked up. He didn’t look up to see Sadio standing there wide open for a tap-in. Secondly, Sadio overreacted in a huge way. Yes, Salah screwed up, but it’s not like we were in any danger of losing the game. If this had been us down to City 1-0 and there was the equalizer, OK. Blow up for a few minutes at the missed opportunity. But all this meant was rubbing the trolls’ nose in it a bit more, since it was late in a 3-0 beatdown.

But then to begin trashing Salah for this presumed “selfishness” means that some idiots either 1) don’t know this team; 2) don’t know football; or 3) just need people to pay attention to them while they sound properly cynical about one of the most congenial and genuine guys on a team that’s full of that kind of people. Incidentally, if you look up Salah’s stats on any number of analytical sites, you’ll discover that Salah is among the leaders for chances created for other players on this team over the past 2+ seasons, which makes any claim about his “selfishness” complete and utter bullshit put forward by people who don’t really pay attention but want more of it. Incidentally, possibly the best pass of the game was put forward by Salah into Gini’s path during LFC’s last real attack of the game. Nick Pope, unfortunately, made a fine save.

So, beware the trolls. We made it out of this one without any broken limbs and tried not to pay attention to the idiots on the fringes who were probably wishing for some, just so they could say they were right about something. 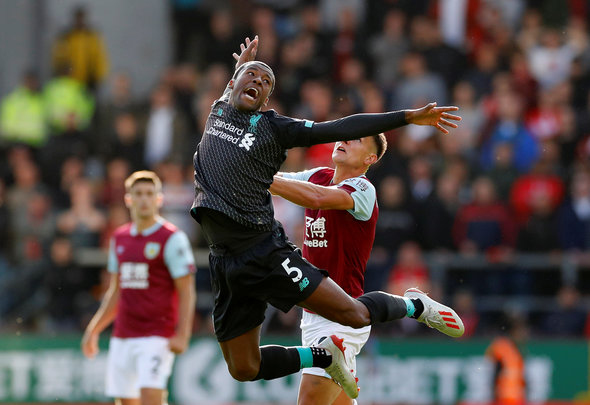 Speaking of Gini. Dude is doing some spectacular work along the touchline and in the middle third again and, generally, not getting credit for it. He retrieved balls from tight spaces in between defenders or intercepted passes to trigger the attack again probably a half dozen times this game. He’s taken on the recycler role in that midfield with a vengeance and because he doesn’t show up in the obvious stats, will still probably be seen as a “weakness” by some of the aforementioned trolls, who are likely still pining for Nabil Fekir. (How does a guy that talented get sold to Real Betís for less than 20M€? There’s gotta be a reason…) 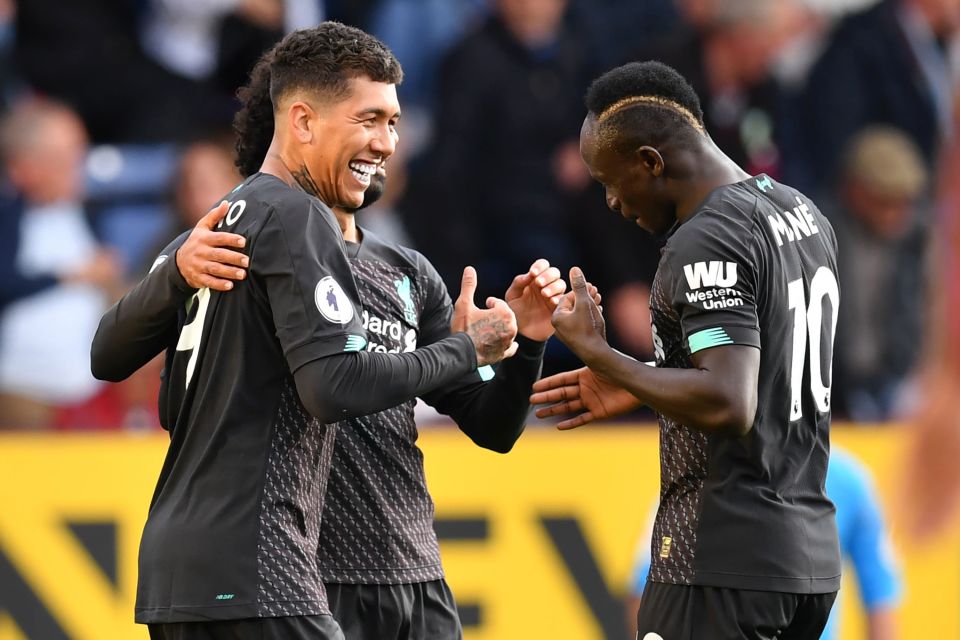 Bob still setting records. Firmino becomes the first Brazilian to score 50 goals in the Premier League, which seems odd until you remember that a lot of the Brazilians in the EPL have been CBs like David Luiz or CMs like Fernandinho. Many of the more famous attackers have taken up residence in La Liga over the years… which also means that Coutinho, for all the wailing about the loss of his “creativity” and scoring threat, also never reached 50 goals in five years with the club. Bob’s in his fifth season right now. He added a slick assist for Mané’s goal, too, along with his usual excellent box-to-box play. And he contributed this performance in the club’s record 13th straight league win which, incidentally, started last season with a win over Burnley… He’s still the engine that makes the machine run.

But the other gadget that makes it run these days is one of the other Brazilians. Fabinho also had an excellent game yesterday, prompting this reaction from Virg:

With a passing accuracy of 83% (2nd on the team behind (ahem) Gini), 3 interceptions, and 3 tackles, he was the perfect DM; constantly covering the back line or dropping back in between Virg and Matip to split the two Burnley forwards. It was nice of Arlo to point that out, BTW. I know a lot of people don’t appreciate his commentary for NBC, but he’s one of the few that will actually point out styles of play. Of course, it was easy in this game since Burnley has a style that makes even slightly modern teams look brilliant. Regardless, Fabinho is becoming more of an asset with every game. 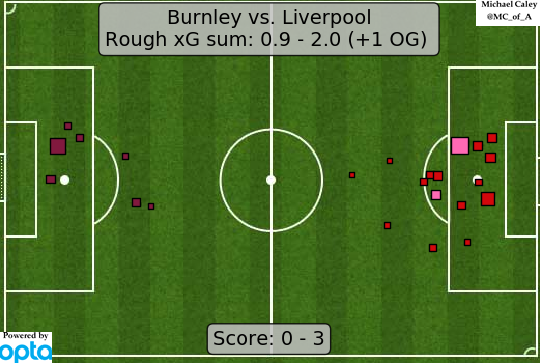 As for the game as a whole, it went almost like clockwork. We had control and pushed it in their faces. Almost every time they came the other way, they were offside. Credit has to be extended to Adrián, who made a couple excellent saves; one early to push it to Virg and one late to prevent a consolation goal by Rodriguez. Also, I think it was a bit harsh to assign the OG to Chris Wood on Trent’s opener. It was obviously a cross and the deflection did redirect it,  but it still seems rough on the guy. Oh, and that thing I was talking about last week re: Trent’s crosses?

Chances created in their 4 Premier League games this season:

Sample size issues, of course, but there’s a distinct possibility I was overthinking it. Also:

Lmao Klopp just shouted "Was soll die Kacke?" (What is this shit?) at someone. As far as I know, Matip and Bobby (and maybe Salah?) are the only ones that speak German so that was a bit strange lol.

Klopp did seem really animated more than once during the game. He generally only gets that worked up when things aren’t going well and most of the game was going pretty damn well. I’m betting that he said that as a general statement and not directed at anyone who he knows speaks Deutsch. Klopp is kind of a perfectionist…

Next week is break time, except for half the team playing in Euro qualifiers or South American friendlies. Everyone just has to come back in one piece and maybe Alisson will be ready to roll against the Maggies at Anfield. Here’s hoping.