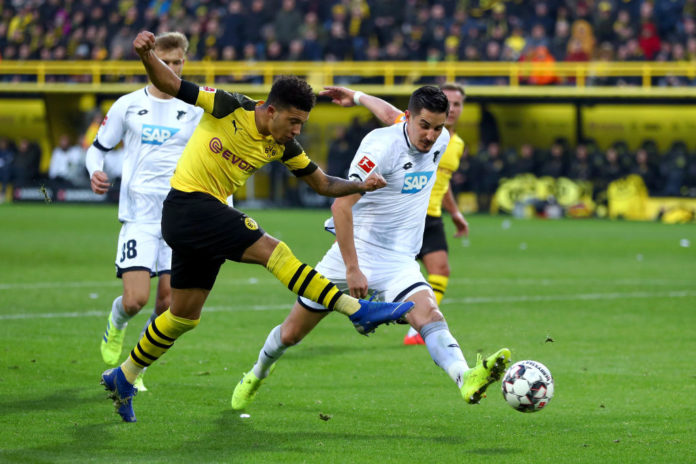 After last season, when Dortmund squeaked into a Champion’s  League spot on the Final Day while selling off Aubameyang midseason, no one really expected Dortmund to win the treble this season.  The fact that they were still on top of the Bundesliga leader board and still alive in the German Cup and Champion’s League in February should more than satiate the appetite of the Dortmund faithful.  But as the injuries have mounted and a flu epidemic swept through camp, the crash has been more of a sudden kaboom than any gradual slipping away of a shot at the titles.

Dortmund’s issues actually started last December with Zagadou, Akjani, Diallo and Toprak all racking up injuries.  Weigl was moved back to centerback in an emergency role that has actually worked out extremely well, but the others have been slow to return following the winter break.  Dortmund’s attempt to remedy the temporary injury situation by buying a young Argentine at the winter break backfired, as he only managed to get himself injured in a national youth tournament before he had even tried on a Dortmund jersey.  And the Frenchman, Diallo, appears to have been rushed back, where he has struggled to find his defensive form and has been well below the standard he performed at in the Fall.  Part of that may be not having the more physical Akjani next to him, while also having a teenager, who is a force going forward but exposes him badly on defensive assignments, playing next to him on the left. 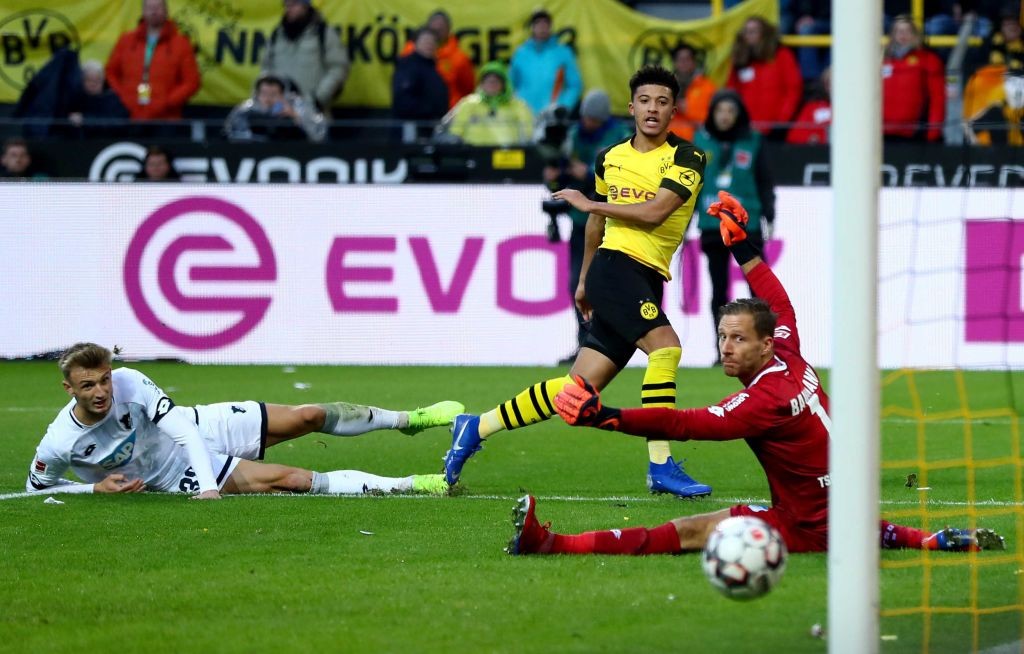 The game against Frankfurt was always going to be tough. Going on the road in the Bundesliga, with the large, raucous crowds awaiting is always a big enough hurdle, but this season Frankfurt has the impressive front line of Jovic, Haller and Rebic.  Jovic is on fire this season and leads the Bundesliga with 14 goals as of the writing of this blog with  nearly all of the big clubs salivating over the 21 year old/next great thing.  The young Serb is simply on fire.  The big Frenchman, Haller has 11 goals and 8 assists to challenge anyone as league MVP, and Rebic is still riding the great form he had in the World Cup for Croatia with 7 goals and 3 assists.  Adi Hutter is also proving to be a far more formidable coach than Nico Kovac ever was (Kovac continues on life support at Bayern, though Liverpool may be days from ending that rash experiment).  Surviving the trip to Frankfurt with just a draw was acceptable, especially where Bayern was simultaneously being crushed by Leverkusen.  Despite the draw, Dortmund gained a point on Bayern on the leaderboard.

What happened next was almost comical.  At a time when they were just starting to get players back from injury, a flu epidemic invades the Dortmund camp just a day before the Cup game against Bremen.  Piszczek, Smeltzer,  Burki and Hitz along with teen sensation Sancho were just a sample of the number of players that were out in addition to the long term injuries to Akjani and Zagadou .  The makeshift lineup featured Toprak at centerback, a modestly talented player at his best and he was far from his best, Diallo moving out of position to play at leftback, and Hakimi switching to play at rightback.  Dortmund may have survived that, but with both goaltenders, Burki and Hitz, out,  Dortmund II’s inexperienced Eric Oelschlagel was next man up. 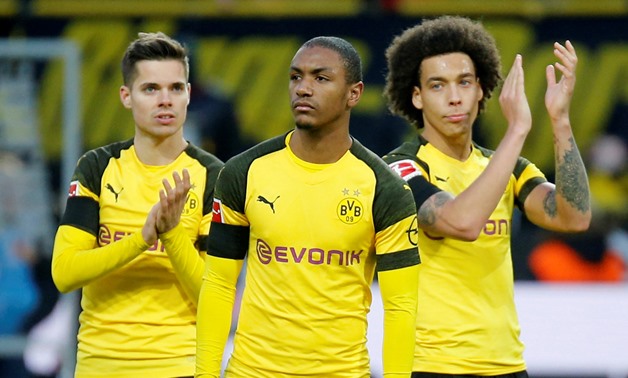 And while such rationalizations seem far to Izzo-ish and it sickens me to post them, the reality was that Dortmund was going to need some good fortune to survive.  They still had Reus, Guerreiero and Pulisic as their attacking midfield, and Witsel and Delaney in defensive midfield/pivot roles.  As Dortmund fans engaged in pre-game, self-flagellation, expecting the worst after the disappointment in Frankfurt, there was still the talent in midfield to outclass Bremen.   Within 10 minutes, though, Dortmund was chasing the game, as the in-form Rashica put Bremen up early.  With an early lead, Bremen was able to play 10 men behind the ball for the rest of regulation.   No sense dissecting the defensive errors, Diallo is not a left back, Toprak is 4th or 5th choice at centerback at best, and few Dortmund fans had ever even heard of Oelschlagel nor does anyone have any idea if I spelled that correctly.

Reus answered with a brilliant free kick just before half, but, of course on a snakebitten day, injured himself doing so and did not return for the second half.   It stayed 1-1 through regulation, but Pulisic had a brilliant goal in the first half of overtime that had Dortmund fans believing that perhaps it was their year and they would just survive.  They didn’t. The 40 year old, amazing, Claudio Pizzaro evened things up again, Hakimi stormed back with a goal for Dortmund, and Harnik came up with the late equalizer to send it to penalty kicks.  Alcacer blew Dortmund’s very first kick, leaving no doubt that Dortmund was exiting the Cup that day. 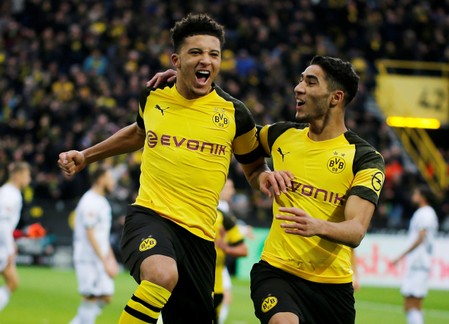 While Dortmund, unceremoniously, exited the Cup, they still had a league game on the weekend and an approaching Champion’s League showdown at Tottenham on Wednesday.   Hoffenheim in Dortmund is a tough game, but should be a winnable game.  Some elements of Nagelsmann’s Hoffenheim squad are better than last year with better depth, but they have not scored in the league as well as they have in past years.  Still, there is quality on Hoffenheim, and they are a pressing and an attacking team that can make you seriously pay for mistakes.  With Reus still out, Dortmund fans nervously waited to see what concoction of a lineup Favre would roll out.  Circumstances got even stranger when it was announced Favre would not be present for the game, as he remained at the hotel with an extremely serious case of bronchitis.

Sancho scored early on a play where he was in the box on the left side, kicked the ball ahead where it deflected off a defender back to him; kicked it ahead where another defender knocked it back to him and just kicked it in.  Initially, the officials ruled that Goetze was in a passive offside position, but upon VAR review determined that he was in the sight of the goaltender and too close to the last defender and waived off the goal.  Dortmund laughed it off, but it proved costly. 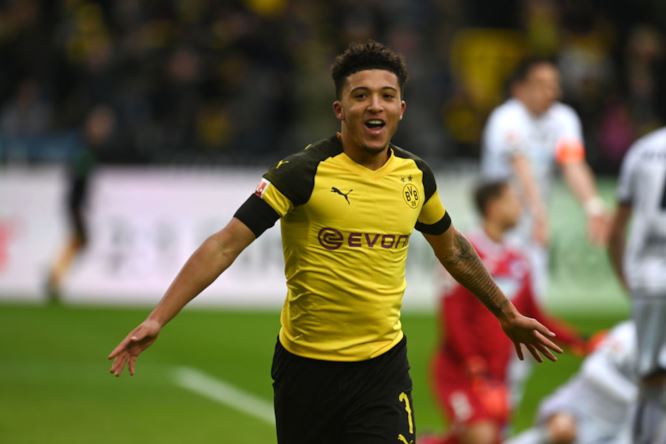 Still in the first half, Sancho found himself nearing the top of the box on the left side,  He started across still short of the box but knocked it back to Piszczek.  Piszczek, though, immediately hit the ball into space ahead of Sachno’s run, Sancho caught up to the ball, coasted and fired a powerful, diagonal shot all the way back across the box and for the far post.  Baumann had no chance in the Hoffenheim goal, it was a brilliant goal.

It was still in the first half, when Sancho was racing up the left side, turned his run in on goal, blasted a shot that Baumann got a hand to and deflected to Dortmund’s right side.   Goetze was racing up on his right side and was there to finish the rebound.  A Dortmund counter that had started with some brilliant play by Hakimi and Witsel, finding the racing Sancho, and Goetze cleaning up.  No Reus, but the first half belonged to Dortmund.

At the half though, Nagelsmann realized Hoffenheim had to physically take the game to Dortmund, as they simply could not play passive anywhere on the field, as Dortmund was just too fast.  Sachno needed to be grabbed, clutched, held, tripped-whatever it took to keep him from racing with the ball up those sidelines.  And Weigl and Diallo needed to be tested by the more physical Hoffenheim forwards.  He brought on Belfodi for Kramaric, and he brought in the young, tenacious Geiger in midfield.  The adjustments paid dividends.  Almost immediately, Joelinton, a physically big and strong, young Brazilian forward overpowered multiple defenders and got a point blank shot on goal.  Burki rescued Dortmund.  Shortly thereafter, Belfodi had a similar play to Joelinton, but Burki was up to the task.

Despite the Hoffenheim push, Dortmund responded with a quick goal against the run of play.  Another blazing quick counter.  Sancho runs it deep pon the right side, drawing three defenders.  He perfectly places a pass for Goetze, also running on the right side, who pushes it into the middle of the box for Guerreiero.  Too easy, 3-0, despite the Hoffenheim adjustments.

With Dortmund having put the game away, or so it seemed, they dropped back and just tried to grab a fourth on counters.  And, dang, if Dortmund wasn’t close.  Sancho hit the bottom of the post with a ball that was millimeters from going in.  And Alcacer came in late and on a counter hit a near perfect ball that shaved the post on the way bye as it was wide by only millimeters.

But Hoffenheim never surrendered.  Their first goal was a ridiculous play that had to make Favre puke in his hotel room.  The Czech international Kaderbek has the ball on the right and just bloops a cross into the box.  There is no one from Hoffenheim near int and Diallo casually swipes at it to knock it away.  But he whiffs.  Dortmund has a 3 goal lead at home, he is likely making dinner plans in his mind, casually moves in to knock a harmless blooper away and he whiffs.  And, of course, Belfodi has closed in on the opposite side and has the easy finish on the blooper missed by Diallo-oops.

Shortly, thereafter, Belfodi returns the favor with a high cross field pass that finds Kaderbek at the post on his left.  Hakimi is standing in front of Kaderbek, but doesn’t seem to have any ideas as to how to defend this, where Kaderbek has gone up high to get the long pass and Hakimi is flat footed (and ducking).  Just like that it is 3-2 and Dortmund is in a full panic.

With all of the momentum, Hoffenheim gets a free kick late.  Dortmund subs in Toprak, figuring one more tall defender can’t hurt, but it was to no avail.  The free kick was placed just over and just beyond the wall, and Belfodi powered through everyone to get to it first and steal a draw from a game Dortmund had many chances to finish off, and a game in which Hoffenheim had one shot on goal in the first half at most.

Amazing finish, and just like that, Bayern is only 5 points back. BMG lost to Berlin, leaving to appear to be a two team race for the Bundesliga title.  Would it have made a difference if Favre was on the sidelines to give the team confidence in the second half and match Nagelsmann’s moves ? Would it have mattered if Reus were healthy and there was the leadership on the pitch to keep the players organized and confident down the stretch? Would it have mattered if Akjani or Zagadou were ready to go?  Still plenty of games left, so don’t panic Dortmund fans.  This is not Bayern of the past six seasons, as demonstrated by the loss to Bayer and the poor defense for stretches against a fairly toothless Schalke team.  Dortmund has a long way to go to the finish line, and Spurs coming up on Wednesday.  Hopefully, Favre has time to regroup and get Dortmund back in the W column on Wednesday.