In the Ruhr District it is the only game that matters.  The first of this season’s Revierderbies between Dortmund and Schalke took place on Saturday, and it was all Dortmund.  Thomas Delaney scored his first Dortmund goal coming off a Marco Reus free kick, and, then, in the 74th minute, Jadon Sancho make a run up the left, did a quick give and go with second half sub Raphael Guerreiro and finished with class.  The rest of the game was just one series of Dortmund attempts to breakdown Schalke’s excellent defense after another. 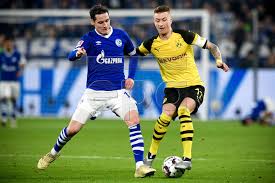 With Embolo, Uth, and nearly everyone else that had played forward for Schalke this season injured, there just wasn’t any firepower for Schalke to even threaten Burki in the Dortmund goal, and Dortmund’s defensive stars Akjani and Diallo were up for every challenge on the day.  There just simply wasn’t even a threat on goal from Schalke at any time.  And Schalke’s lack of threat became even more extreme when Burgstaller had to leave the game in the first half due to injury. Schalke could do little but move a central midfield player in American McKennie and a French left back into the forward spots, but neither looked at all comfortable playing up there nor was there really any service from a Schalke side already struggling to score goals this season. 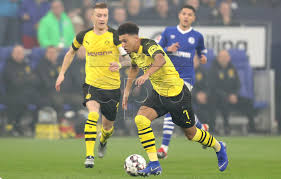 Meanwhile, Dortmund is atop the Bundesliga leader board and just continues to get better.  The Real Madrid teen, Achraf Hakimi, has emerged as one of the best fullbacks in the league and showed flashes of speed on Dortmund’s left all day, while Jadon Sancho was just a threat every time that he touched the ball.  And, of course, Marco Reus provided the perfect free kick in to Delaney for the opening goal and orchestrated the Dortmund attack all day long. Witsel was equally brilliant commanding midfield all day, as he and Delaney completely controlled midfield and simply took the ball away from Schalke at will.  Schalke defended well, but was devoid of any idea as to how to attack or counterattack Dortmund, and simply lacked the speed or talent in midfield to get the ball past Witsel and Delaney.

While last season featured Schalke’s legendary 4 goal deficit and one of the greatest comebacks for the draw ever, Favre’s Dortmund is a far different team.  With two physical players in midfield in Witsel and Delaney, and two excellent young centerbacks in Akjani and Diallo, it is a tough task for any team to score in open play and Schalke needed a very lucky and unwarranted penalty called on Reus in the box to even get on the board.  In the end though, it was just a matter of time before Dortmund put the game away though, as they continued to put pressure on the Schalke goal all game long.

Now the winter break approaches and Dortmund can sort out their moves for their second half run for the title.  There are rumors of offers being made, but they aren’t a team with enough depth to let more than a player or two, who hasn’t been playing, go.  And, as much as they would love to add a forward and another central midfielder, there are not likely to be many on the market in January.   Primarily, Dortmund will just need to rest up and pray that they can stay healthy enough to stay on top in the second half of the season, while their young stars like Jadon Sancho continue their incredible run this season.