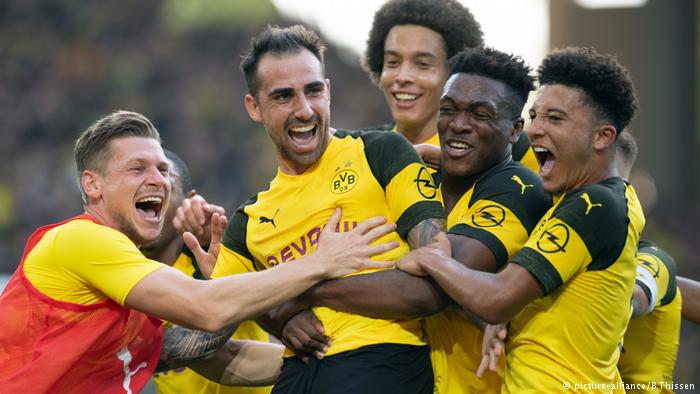 Thank God I already have a cardiologist, as after Saturday’s fun I may need a tune up.  Dortmund found themselves down 1-0 for over 40 minutes, after Alfred Finnbogason  gave Augsburg the lead only twenty-two minutes into the game as he slotted a goal past Roman Burki. Dortmund tried to climb back into the game in the first half, creating a few scoring opportunities but the finish just wasn’t there and the midfield seemed bothered at times by Augsburg’s pesky pressure.  Dortmund just didn’t appear to be in sync and it looked like a long day for the yellow and black.

Favre realized they needed someone to put away those opportunities they created in the Augsburg end, and on came Paco Alcacer in the 59th minute for Max Phillipp. Only minutes later, he evened the score, finishing off a pass from the extremely impressive speed demon, Jadon Sancho.

But Augsburg wouldn’t go away and Philipp Max put them back ahead in the 71st.  Less than ten minutes later, Raphael Guerreiro, on for Jakob Bruun Larsen, teamed up with Paco, as Paco evened the score at 2.

Shortly thereafter, Hakimi provided service for Mario Goetze (making his first Bundesliga appearance of the season) to finish as he made a great run through the Augsburg defense.  Finally, it looked like it was over as Dortmund could simply coast to another W and stay on the top of the Bundesliga through the international break.

However, Michael Gregoritsch got ahold of a Philipp Max corner, and Augsburg evened the score with only three minutes left in regulation.  Dortmund, though, simply was not satisfied with a draw and pushed hard in the final moments of extra time for that decisive goal that would keep them at the top. 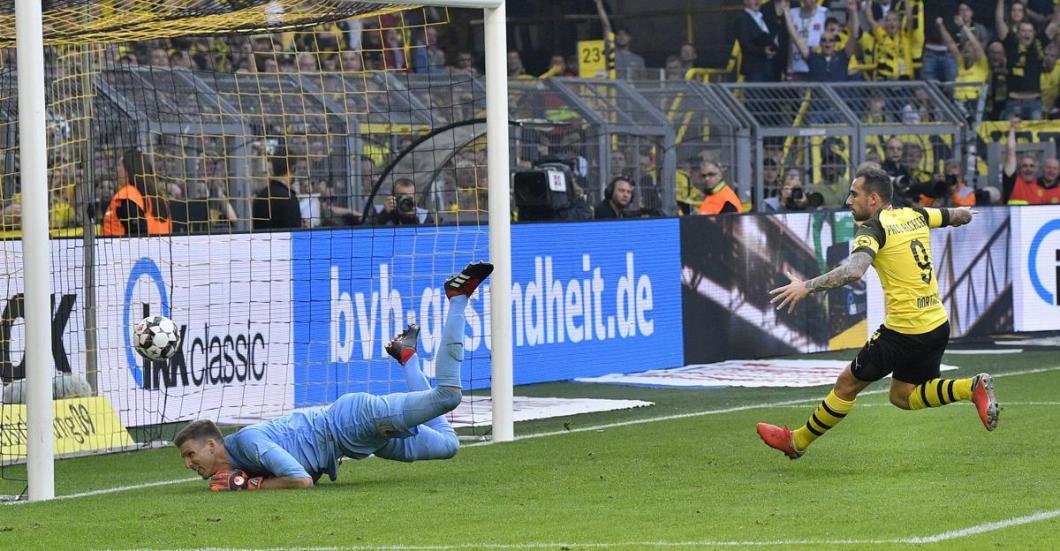 In the end, it was Augsburg’s strategy of fouling Dortmund hard any and every chance that they got which came back to bite them.  Augsburg racked up 22 fouls in this game, earning  7 yellows in the process, and it was the last of those hard fouls that led to Paco’s free kick in the very last second of extra time.  Paco, of course finished off his hat-trick with a phenomenal free kick goal, bending the ball around the wall with enough arc to somehow comeback and find the bottom corner of the goal only millimeters inside the post. Another astonishing finish from a game which featured some shaky defenses, Augsburg using consistently late and extremely aggressive and hard tackles to try and slow the overwhelming Dortmund speed advantage of Hakimi and Sancho, and Dortmund getting off to a slow start.

The day subsequently was even more enjoyable for Dortmund fans as Moenchengladbach steamrolled Bayern Munich in the Allianz Arena, 3-0, leaving Dortmund with an even bigger points lead in the table heading into the break.

No one is ready to anoint Dortmund league winners just yet.  The oldest player that lined up in their Hakimi, Akjani, Zagadou, and Diallo defense on Saturday was just 21, and they made plenty of mistakes, conceding 3 goals.  Additionally, the entire attack was out of sync for most of the entire first half yet again.  But Favre does seem to know where that switch is and what moves to make to get this team to score goals and, when he does, it is just good, old-fashioned fun to watch.

In the category of Americans in the Bundesliga, Bobby Wood bagged two goals for Hannover over the weekend and Weston McKennie scored one for Schalke as well.  And, lastly, in the Ripley’s believe it or not category, it was the oldest player in the league in 40-year-old Claudio Pizarro with the assist to a player literally half his age, as 20-year-old Johannes Eggestein scored his first Bundesliga goal for Bremen.