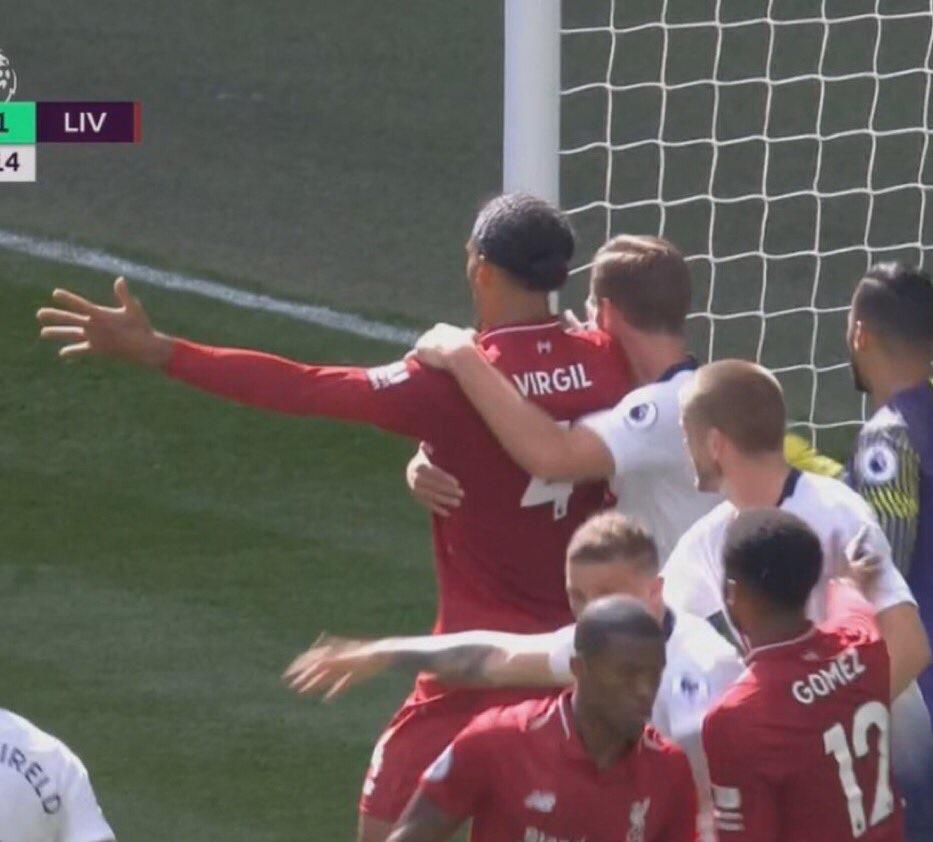 What I really like to see is when teams that are otherwise fiercely engaged in the mortal kombat that is the Premier League take some time out to forge those human connections that bond all of us. Take Jan Vertonghen here. Clearly, he’s been overcome by the same impulse that a lot of Liverpool fans would have in the presence of VVD: the joy of knowing that Liverpool is now, in fact, an elite defensive team is leading him to express that to the principal architect of that transformation. Plus, they’re both from the Low Countries (Vertonghen is Belgian, while VVD is Dutch) so they have that cultural touchstone, which could also lead to the deeper communication that keeps humanity from tearing itself to bits at every moment, instead of just most of them. And, of course, that means it wasn’t a penalty because Liverpool still doesn’t get those. EPL officiating, FTW.

Why am I bitching so much about the Reds’ first game against another member of the top 6 this season? After all, it was about as resounding a victory as a 2-1 scoreline can be, given that the aforementioned elite defense barely allowed one of the best attacks in the league to set foot in the box and easily could have won by 2 or 3 or even 4, given their xG rating of 3.4. Liverpool’s attack was on fire for extended lengths of time, even after Spurs deliberately slowed the pace of the game in the middle third to try to neuter that attack. Tottenham is also at their best when the game is more open and free-flowing but, as I was tweeting to Liverpool Offside during the game, no one does Liverpool as well as Liverpool, so it was in Spurs’ interest to try to grind out a draw or even a narrow win, rather than see if they could trade punches with the (would be) Flying (except bear-hugged) Dutchman and the Triumvirate up front.

Even with that attempt to slow things down, as Dave noted here, Pochettino kind of dug his own hole by putting Trippier and Rose so far forward. In that respect, you’re just inviting Mané and Salah to run past you, which they did, repeatedly. One could argue that Trippier’s positioning led directly to Firmino’s goal that turned out to be the winner, as Sadio just streaked past him and tossed the ball into the box, where Vorm’s inability to secure it allowed Firmino to slam it in with authoritah. Plus, I’m more than willing to match our midfield against anyone else in the league at this point. The trio of Wijnaldum, Keita, and Milner is performing exactly as a Klopp midfield should: always on top of the ball, securing the zone ahead of the back line, and always thinking about restarting the attack.

So, why begin with complaints? I’m a Liverpool fan. I’ve spend the last 30 years waiting for the other shoe to drop in League contests. But, maybe… maybe… this year is different. Together with Chelsea, Liverpool have done something that no two top division teams have done in 110 years: win their first five. If both go on to win their sixth (Juniors- ahem, Soton for Liverpool; West Ham for Chelsea), then we’ll settle the claim to the top at Stamford Bridge on the 29th. I’m feeling more confident about that game than I have in years. This is the reality now: Liverpool, league title contender.

Marathon man Milner and four other talking points from Liverpool's 2-1 win over Tottenham.

All credit to Wijnaldum, who continues to do remarkable work at the 6 (and who scored his first Premier League road goal after 58(!) away games), while Keita continues to show moments of magic with his burst forward and sharp passing, but Milner’s production at the age of 32 just leaves me agog. What those stats don’t really show is his versatility. He’s been switching on and off with Keita in the recycler and attacker roles in the 4-3-3 and has been a rock in both. He got gummed up a bit by Spurs in the first half, but when they went on the attack, he secured his touchline, intercepted passes, and kept swirling in the chaos, just like the players 7 and 8 years his junior.

S is for something. Meanwhile, a lot of the conversation on the forward end of the field revolves around our various S for Superman(?) players. Why isn’t Salah scoring? Is Solanke stuck in the U23s because of the players ahead of him? Is Sturridge seriously back as the next best option at center? Will Shaquiri step into a starting role sometime this season? How much alliteration can I accomplish in one paragraph?

In order: I don’t think there’s any concern with Salah. He’s missed a couple sitters, but that happens. He also had the highest expected assists number in the league before this weekend. Similarly, I think Solanke might have secured a higher position in the pecking order if he hadn’t missed a lot of obvious chances last season and Sturridge hadn’t gone through a revival over the summer. Remember, a lot of us were thinking he was a surefire sale last May. The Power Cube remains an entrancing thought whenever there’s an obvious moment to swap out Firmino or two of the three starting midfielders. (I’d say I’m skeptical about his ability to function at the six, given his offensive predilections, but I’ve had my doubts about him disproved before.) Most of these are nice problems to have and the first one (Salah) will sort itself out in the coming stretch of games. I’m sure of it… (That last one is a ‘sh’ sound. Yes, I know “Shaquiri” is, too. Shut up.)

Oh, yeah. Substitutions, too. After having Klopp prove me wrong about his approach to both building a team and game management, I have to say that the one thing that still nags at me occasionally is his substitution pattern. When we were cruising at 2-0 and in control of the game, I thought that might be a convenient time to start resting some of the starters for Tuesday’s match with PSG. Klopp apparently thought so, too, but 10 minutes later than I did. As referenced above, we have so much capable depth right now that it doesn’t seem too soon in the campaign to start giving some of them some more playing time and insuring that our guys don’t end up dragging in late March. In the end, he was going to bring on Henderson for Keita when this happened:

Thankfully, it looked a lot worse than it was (Firmino confirming on Instagram that he’s OK), but Henderson ended up coming on for Bob, instead. That sent Keita up to play the 9 for a few minutes until Sturridge could come on to replace him. Given Keita’s role in the midfield, playing him as our false 9 isn’t too dissimilar and it’s nice to have that kind of confidence in the team, regardless of circumstances. That said, it’s funny how we end up conceding goals lately when the captain comes on the field, which is doubtlessly just random noise, especially since Lamela’s goal was a nice shot off a set piece. Some people are blaming Matip, too, but that’s because some people gotta complain. I’m still in favor of exploiting the depth we have and am hoping to see at least half the regular starters replaced for the League Cup match vs Chelsea and a few for the game against Southampton, too.

Let’s just look at this one more time.

so liverpool, seem like they're not bad at the football pic.twitter.com/7JK9tkmyEe

You see that concentration on the left side? Again, that’s Mané eating Trippier alive. And this is a game against another top 6 side where one could argue (and Spurs fans certainly are) that it appeared more even than it actually was.

Around the Premier League

First person to figure out how Burnley has so completely imploded might win a free trip to Turf Moor to be their new starting DM. They have one point out of their first five games and failed to qualify for the Europa League. They did “only” spend £30M over the summer and still have the lowest wage bill in the EPL, but the way they’re playing now seems like they’re going to take their best season in half a century and follow it with relegation.

Good on West Ham to get off the schneid, especially since they did it at the expense of (snicker) some other team in Liverpool. That’s the West Ham I kind of expected to see after the money they spent this summer.

Say what you will about City being the same murderous machine that they were last year. It’s all true. But the team that really concerns me is the revived Chelsea under Sarri. They just look good, from end to end, and it feels appropriate that they’re sitting atop the league with us.