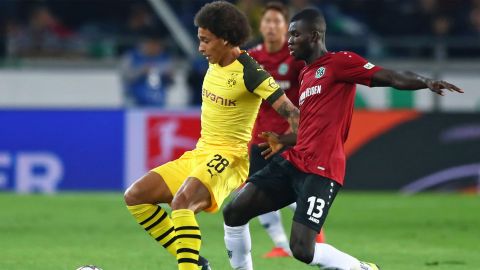 Marco Reus had two great runs through the Hannover defense at goal in the first half, which was the full extent of Dortmund’s highlights against Hannover.  During his first run, he sped through the defense and slammed a perfect shot for the far post.  Somehow the Hannover goaltender just got a foot on it and desperately knocked it wide.  Was a great opportunity, a great shot, and a great save from the goaltender.  Only minutes later, Reus broke through the Hannover defense a second time and blasted at goal, catching the crossbar.  These were really the only two highlights from a depressing, scoreless draw in Hannover.

Hannover actually owned the lion’s share of possession, but struggled to create any memorable scoring opportunities and may not have even taken a shot at goal in the first half. Dortmund played some tight lines in their own end and never really pressed or pushed forward all that much all game.  They didn’t set up deep in their own end, but the central defenders didn’t really push up all that much out of the back third either, and the two fullbacks  played an extremely passive game. There was simply no bite to the attack, which was compounded by the fact hat Marius Wolf starting on the wing is an extremely energetic player who never really attacks the defense He routinely passed the ball into the center or even backwards, in a way that was the exact antithesis of Christian’s Pulisic or Jadon Sancho.  With Pulisic injured, can’t imagine why Favre favored Wolf, who has struggled to make any positive impact since his arrival at Dortmund, over Sancho.

If there is a silver lining, it was just that Dortmund did appear far more organized on defense than they have in quite some time.  But a scoreless draw on the road against a team expected to finish in the bottom third of the league is a disappointing result for a team with aspirations of competing for the league title and getting out of their group in Champion’s League.  Hopefully Paco Alcacer can add some spice to the Dortmund attack, which looked lively in the second half against Leipzig but was nonexistent for most of the game against Hannover.