The Worst Kept Secret In The Bundesliga

The worst kept secret in the Bundesliga is that Dortmund need a striker. Dozens of names, including Batshuayi, Modeste, Plea, Morata, Zaha, Gamiero, Martial, Kean, Gomez and now Origi and Alcacer have appeared in the daily updates, and who knows where Michael Zorc is really searching. Despite the denials from the Dortmund brass, and even the explanation of Lucien Favre that signing a striker is not necessarily an absolute necessity, signing a striker immediately is an absolute necessity.

Dortmund’s first German Cup game this past Monday only proved the point. Thirty shots, eight great chances on goal that even the manager Lucien Favre concedes should have been goals, and Dortmund only escaped Fürth in the most dramatic fashion imaginable.

Greuther Fürth’s youngster Sebastian Ernst put the Shamrocks ahead late in the second half with a goal in the seventy-seventh minute. As the lead held into injury time, it looked like an embarrassing exit from the Cup for new Dortmund manger Favre and the many new faces he had assembled in the Dortmund squad. Dortmund certainly had long lulls in the game, but produced more than enough opportunities in the first half alone to have easily won. 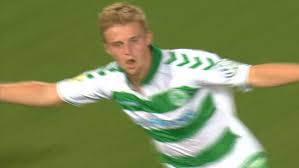 As the game moved into the dying seconds well into the fifth minute of injury-time, and as Dortmund goaltender Roman Bürki snuck up over the midline to knock a ball back into play that Fürth attempted to clear, Marco Reus placed a perfect floating pass into the path of Axel Witsel as he ran behind the Greuther Fürth defenders and Dortmund’s late midfield addition finished in class. His debut as a second half sub was a huge success to say the least. Witsel commanded midfield and stole three points from the Shamrocks with only seconds to spare.

The overtime provided even more drama, as Jordan Sancho worked his way past three defenders to the endline late in the one-hundred twentieth minute of overtime before cutting a perfectly directed pass back to Marco Reus planted in the box, who finally put the Shamrocks away. As fantastic and as memorable as the finish was, with a true number nine playing up top, the game would have been over at the half. Granted, Dortmund doesn’t want to be extorted into having to overpay, and haven’t trimmed the roster as much as they had hoped, but with RB Leipzig coming to town for the opener this weekend, Dortmund needs a goalscorer up top and is running out of time to get it done.

Meanwhile, one-time Dortmund target Alassane Plea had a hattrick for Mönchengladbach, as did Hazard and Raffael, as the Foals slaughtered Hastedt scoring eleven. Plenty of young German forwards scored over the weekend including Johannes Eggestein for Bremen and Jan-Fiete Arp for Hamburg. Even former Dortmund youth team forwards Daniel Ginczek (Wolfsburg) and Marvin Ducksch (Fortuna Düsseldorf) grabbed goals. With the Bundesliga season about to start, Dortmund needs a goalscorer now.