On the day the transfer window closed in England (in a World Cup year… before the season starts… No, I don’t understand the FA, either.), I decided to ask some of my heretofore absent fellow scribes about what they might do with a question I saw floating around the Twitters: “If you could recruit one player for your club from each of the top 5 leagues, who would it be?” The idea with this question is not to add the best player in each league, but the one that would fit best into your squad for the coming season (which may be the best player in said league, but that’s not the point of the exercise.) The answers were both uniform and diverse. 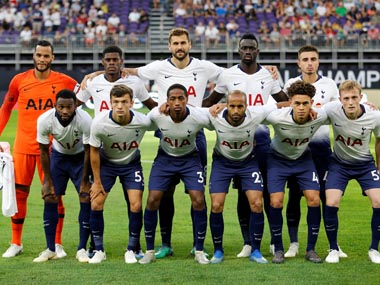 “So, I am a Tottenham Hotspur fan…for a number of different reasons. I started paying close attention in 2012-13, during the Great Bale Year. That kinda got me into club soccer. Before that, I know some names/results/trends, but nothing too consistent.
I know some, not a lot, about the other main European Leagues, so I’ll answer this question with the caveat of Guys Spurs Were Kinda/Maybe/Hopefully Linked To and Could Potentially Even Pull Off Signing… Maybe.
EPL: Ryan Sessegnon. The next Bale? Maybe. He’s a left back (for now) with Fulham, and the rumors were that he would be sold -potentially to Spurs- if Fulham didn’t get promoted. So, of course they got promoted. In the last game of the promotion playoff. By a Sessegnon goal. Awesome. Anyway, he’s a long, speedy, 18-year-old left back and probably moving up the field as he grows into his potential… vand legs. Sounds familiar. Anyway, giving Poch a fullback like this would be a whole lot of fun… especially with the transfer/injury uncertainty of Danny Rose and the Good-at-Everything, Great-at-Nothing Ben Davies, who is solid but better suited as a rotational player at this level.
La Liga: I mean, I could name like 20, but realistically? Mateo Kovacic. So, of course he is loaned to Chelsea for a year. Boy, he and Kante will make one hell of a Europa League midfield in the 2018-19 campaign. Regardless, he’s similar to a younger Luka Modric and would fit nicely next to/in front of Eric Dier in Spurs midfield. Tottenham has been rumored to be selling Moussa Dembele (however, they may not sell/sign ANYONE). Kovacic would be a great replacement for a lovable, yet aging Dembele.
Bundesliga: So, I’m not super familiar with the top German league, but I know for a bit, Spurs were linked to Christian Pulisic. This would be perfect for Poch, as he can play anywhere in the attacking band and would potentially not force Christian Eriksen to play every game ever. Spurs have a number of attacking midfielders (and I’m relatively high on Lucas Moura), but with the uncertainty of Sonny and Dele always linked to everywhere, grabbing the Great American Soccer Hope would add to Poch’s sub-Kane utilities.
Ligue Un: Okay, so we’re all saying Kylian Mbappe, then? Sure. Kane needs a backup, anyway.

Serie A: We’ve now reached the fringes of my soccer followings… or we passed it by long ago. Tottenham was sorta linked to a DM from Napoli: Amadou Diawara. Very young. Probably a little underrated. From what I read, he had a very nice year according to some advanced stats. I know little more than this, but if he’s an intriguing 20 year old DM from a solid Italian side… Alright. That sounds alright.”
Sadly for Dave, Tottenham did, in fact, become the first team of the Premier League era to ignore the summer transfer window. When you spend £1 billion (with a ‘B’) on a new stadium, I guess it makes you reluctant to improve the squad that sells tickets to that stadium? That’s #3 in the success model that always ends in “Profit!”, right?

Next we have Bob B, Borussia Dortmund:
“More than half a season has passed since Dortmund sold Aubameyang, and they continue to struggle to find a permanent replacement at forward.  Chelsea purportedly demanded more than €77 million to make last season’s second half loan, Michy Batshuayi, permanent and Dortmund found the demand to be exorbitant.  At the same time, Dortmund is in the midst of clearing out a number of aging veterans from the defense and central midfield. While some effort was made this offseason to fill those gaps, finding a forward should remain a priority.  With that in mind, my choices for one dream player from each of the five big leagues to come to Dortmund would be:
Premiership- From the Premiership, it would have to be Romelu Lukaku.  The twenty-five year old Belgian would be an even more ideal fit for Dortmund’s fast attacks and combinations with Pulisic, Reus, Philipp, and Sancho than Batshuayi was last season and for the same reasons that Aubameyang routinely competed for the Bundesliga scoring title. Lukaku’s deceptive speed, power and expert passing would be positively lethal when featured in the Dortmund attack.
La Liga- For the past few seasons, Roman Burki simply struggled to find consistency.  An excellent athlete playing goaltender, Burki should be among the best, but he just never performs to the same level in every game.  Marwin Hitz was a good addition as the former Augsburg man is consistent, but Jan Oblak of Atletico Madrid would be an amazing addition.
The twenty-five year old Slovenian goalkeeper is as good as any in the game right now.  Oblak is known for great performances against Bundesliga teams, saving a Thomas Mueller penalty in the Champion’s League a few years ago along with one of his most well known performances where he turned back three successive Bayer Leverkusen shots first stopping Julian Brandt and, then, turning away two from Kevin Volland.  And if we are dreaming, adding Real Madrid’s incredible, attacking, left back Marcelo would be amazing, as well.  He may be 30, but he is still a force to be reckoned with.
Ligue 1- There is no point in wanting anyone from the French Ligue 1 other than Kylian Mbappe, where Mbappe is well on his way to being amongst the best players in the game already at only age 19. And, though he isn’t that well known yet, Tanguy Ndombele of Lyon would be a great addition to a young, fast, attacking Dortmund team.  Central midfield isn’t necessarily a need for Dortmund, but Ndombele is fast and has phenomenal dribbling and passing skills that would make him an unbelievable addition to the Dortmund attack.
Serie A- Mauro Icardi is another player that would be a great fit for this Dortmund team and a great replacement for the departed Aubameyang.  Though just 25, Icardi already has 100 goals for Inter Milan and could be even more productive at Dortmund. Granted, he is not known as a truly fast player, but his reputation as an “animal in the box” and his incredible ability to quickly pounce on any service in the box could work very well at Dortmund.
Bundesliga- Josh Kimmich is not only one of the best right backs playing in Europe, but he is a Bayern player in his prime that would make it so much fun for Dortmund to get the opportunity to turn the tables for once. Lukasz Piszczek is thirty-three and Dortmund’s attempt to replace him with Jeremy Toljan just simply hasn’t worked so far.  Bringing over the best attacking right back in the game with his high energy and relentless attacking would be an amazing move for Dortmund.  Of course, it wouldn’t happen in a million years, where the German youngster is loved at Bayern and they have twice as much income as Dortmund on a yearly basis, but it is fun to dream.  And, of course, it would also be fun if Dortmund brought in Augsburg’s Philipp Max to play at left back.  Another energetic, attacking fullback, Max had 12 assists last season to finish with the second most assists in the league.  It certainly would be fun to have a left side where Philipp Max attacked from the left back position while Max Philipp attacked from the left wing.”
So, from there we can determine that BvB might need some help at left back. Mauro Icardi is a name I haven’t thought about in a while. I was happy to learn that ESPN had picked up the Serie A rights for the coming season and multiple years after that, probably not least because of the potential Ronaldo viewers. So now we’ll have regular access to four of the five top leagues. There has to be a Neymar market on this side of the pond, right?

Next up is Michael Bird, FC Barcelona:
“Ligue 1: Kylian Mbappe – because he’s the best young player in the world, a potential upgrade as a striker in front of Messi (I suspect that that’s his long-term spot), and to keep him away from Real Madrid, the club that he supported as a kid.
La Liga: Isco – Barca have made many mistakes with respect to recruiting midfielders, but letting Isco slip through their hands and get to Real Madrid was the biggest.  He’s the most natural replacement for Iniesta.
Bundesliga: Joshua Kimmich – an upgrade at right back, which is Barca’s weakest spot.  Imagining the terror that opponents would feel with Kimmich on the right and Alba on the left…
That’s it.  I’d win another treble with those three.”
Hm. So much for playing along. As good as Barca is, I find it hard to believe that there isn’t a single player in either Serie A or the EPL that wouldn’t be an upgrade somewhere, or at least solid depth. The latter is what I was thinking in many ways for LFC, since we’re already secure this year at a healthy number of positions and much of the team is still so young. 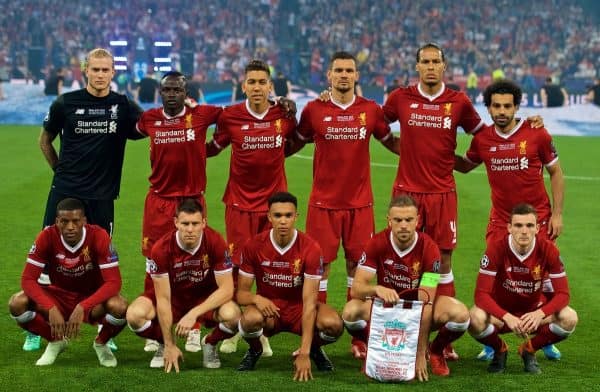 My choices for Liverpool are:
Premier League: Kevin De Bruyne. As I noted last time, one of the key spots for the 4-3-3 is an attacker. I have no reluctance to name De Bruyne the best attacking mid in England and one of the best in the world, but the best part is that he can also play wide or more forward.
Serie A: Similarly, I’m still thinking about the midfield and think that Radja Nainggolan might be the best fit, even at 30. He can play a controlling role, similar to Keita and still provide a lot of attacking force (like Keita.)
La Liga: Raphael Varane. Despite Lovren’s claims to be one of the best defenders in the world, Varane is a step above most CBs in Europe and would be the ideal pairing for Van Dijk.
Bundesliga: I was thinking about Leon Bailey, since he’s already been linked to Liverpool, but Bob suggested Salif Sane from Schalke (and a teammate of Mané on Senegal) and I remembered that I’d enjoyed his play during the World Cup. Plus, we can still use more CB depth, since our depth is still questionable, injury-wise, and we were apparently attempting to reduce that depth during the window. (WTF?)
Ligue 1: I mean, seriously… Come on. Is there anyone who wouldn’t want Kylian Mbappe on their team? Liverpool has what may be the best front line in Europe and I’d still be eager to sign up the teenaged Frenchman.
So that’s the last transfer window fantasy until January (unless Bob or Michael have something to add, since the window is still open in their clubs’ nations for the rest of August. Tomorrow, the march to the EPL title begins…